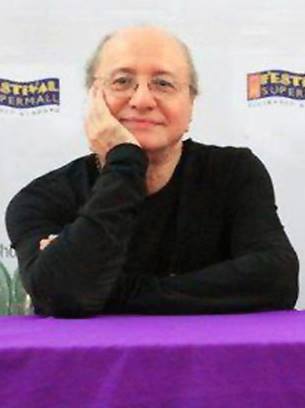 MANILA, Philippines—Popular talents who made it through valuable help from veteran director-actor Fritz Ynfante are gathering for a special tribute show on Friday, (November 28) at 8 pm at the Music Museum.

The celebrity-studded event will feature some of the notable showbiz talents linked to Direk Fritz’s storied career in one way or another.

Significant people who have been part of his journey in front and behind the camera are expected to appear in “I’m Still Here Barbra and I: A Soiree for Direk Fritz Ynfante.” Guests include Pops Fernandez, Edu Manzano, Zsazsa Padilla, Arnel Ignacio, Ariel Rivera, Basil Valdez, Cocoy Laurel, Cesar Montano, Epi Quizon, Pilita Corales,Richard Merck, Ryan Agoncillo, Geleen Eugenio, Powerdance Dancers, German Moreno, Dawn Zulueta, Nanette Inventor, whose Dona Buding character he created, and Martin Nievera, whom he practically discovered while working as director for “Penthouse Live.” Other surprise attendees are said to be coming.

Direk Fritz is known for his admiration for the iconic singer Barbra Streisand that the local public already attached his name to the international diva with a deep sense of honor. The title is adapted from a song famously performed by Streisand.

Big names in Philippine showbiz—in music, theater, and movies—will share time to sing songs for Direk Fritz and stories about their experiences with him.

Apart from his directorial stint with “Penthouse Live,” Direk Fritz also handled other groundbreaking TV shows like “Keep On Dancing” and “It’s a Date.”

In a past interview, Direk Fritz stated, “I’ll take my style, integrity, and originality. That’s what I am proud of.” 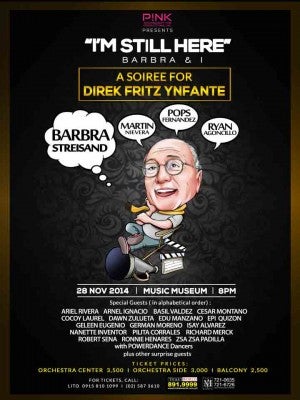 As an actor he appeared in movies like “José Rizal” (1998), “Gumising ka… Maruja” (1978) and “Mananayaw” (1978). In recent years he acted in Vic Sotto movies, namely “Enteng Ng Ina Mo” and “Dobol Trobol “where he played the role of Doc Fairy and Chef Paco, respectively.

Last year, after he got involved in training top beauty contestants in communication, he predicted the victory of Mutya Datul at the Miss Supranational held in Minsk, Belarus. He also helped train Janine Tugonon for the Miss Universe 2012 pageant where the latter ended up placing second.

During 2013’s holy week observation, the public also made notice of his creation at a exhibit showing “a new wave stations of the cross,” adorned with Filipino culture touches and peopled by unusual models including a cancer survivor for a Virgin Mary.

“I’m Still Here Barbra and I: A Soiree for Direk Fritz Ynfante” is presented by Pink Productions.