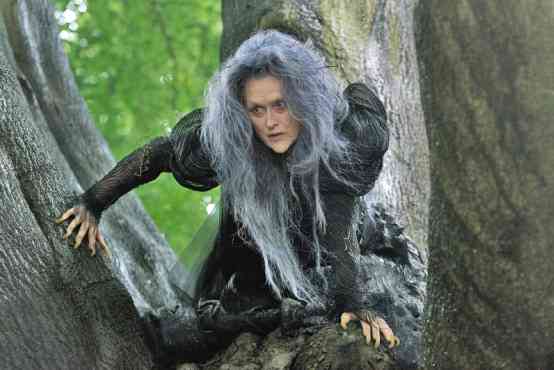 LOS ANGELES—I made Meryl Streep gasp and suddenly stand up in near-panic during a recent New York press conference. I had barely begun asking my first question about Stephen Sondheim when the greatest living actress, hearing the composer’s name, exclaimed, “Oh, I have a letter from Stephen! Let me find it!” She hurriedly stepped out of the Waldorf-Astoria Hotel meeting room to look for the letter.

Meryl, clad in black jumpsuit, blonde hair in a simple ponytail, came back empty-handed. “Anyway, I have a letter, because Stephen was very sorry he couldn’t be here. He’s ill,” explained the bespectacled acting legend recently awarded the US’ highest civilian honor by President Barack Obama. 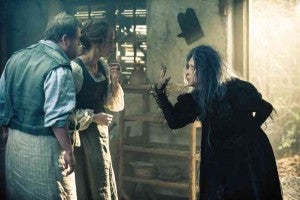 MERYL (right) as The Witch puts a curse on James Corden and Emily Blunt, as The Baker and The Baker’s Wife.

When Meryl’s publicist walked in with the missing letter, the actress stood up again to get it and said, “Oh, thank you!”

She sat down to read Sondheim’s letter in full: “James Lapine, my good friend and collaborator for 30 years, with whom I wrote the show, is present to help convey the pride we feel in the movie that the Disney Studio has made of it. As has been demonstrated time and again, stage shows are notoriously difficult to bring to the screen satisfactorily because stage and screen are such totally different mediums.

“The Disney film of ‘Into the Woods’ is a happy exception, partly because so many of the cast [members] come from the stage and understand the difference and partly because Rob Marshall, the director, is an accomplished and imaginative practitioner in both theater and screen. Another reason I have to add, blushingly, is that James and I were closely involved in the making of the movie all along the way from conception to refinement.”

Then she answered my question about her memories of watching “Into the Woods” as a stage musical the first time. Rob Marshall directs the film adaptation of the musical that wonderfully intertwines the plots of several fairy tales. Playing The Witch, Meryl once more bewitches as she sings and acts, especially when she pleads, alternately in a tender and powerful way, to her daughter Rapunzel in “Stay With Me.”

“I saw the original production with Bernadette Peters and Joanna Gleason,” Meryl recalled. “I thought it was amazing. I remember subsequently that people would complain that the tunes were not memorable. I couldn’t get the tunes out of my head—‘No One Is Alone,’ ‘Children Will Listen’ and all those. They were indelible from the night I heard them in 1987.

“The show was wonderful and it was unlike any other musical. Stephen has an indelible fingerprint and it’s unique. There’s no one like him. He’s our greatest living composer and certainly of the great American art form, the musical.” 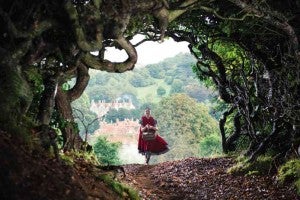 Asked how long it took to transform her into The Witch, Meryl, ever candid and spirited, quipped, “It took much longer to be the beautiful witch because he (Peter Swords, makeup and hair designer) didn’t even have to comb the other witch’s hair. He just went and got coffee. But when I was going to be a beautiful witch, he was feverishly working.”

On hanging upside down from a tree in one scene, the multi-awarded thespian admitted, “That was terrifying. It doesn’t even look scary but it was really hard (laughs) because you have to literally hang. Your knees are holding you up. I could do that when I was 10. But my God, there’s a lot more weight on your ligaments. I was afraid I’d fall but it was fun.”

Reminded about having complained that, when she turned 40, she was offered three witch roles in a span of one year, Meryl pointed out, “Clearly, I’m not the love interest anymore. It was like a cut-off. It was really interesting.

“I just didn’t like how witches were perceived in history. I didn’t like the little old crone—people being afraid of older ladies because they couldn’t figure out a use for them. So they vilified them and made them the cause of all the evil in town. I just didn’t like that. I don’t like the trope. I reject it. I don’t believe it. The old ladies in medieval times must have had the worst lot in the village.”

She cited why she took on this particular witch part: “This is Sondheim and it’s a story worth telling. It’s a three-dimensional idea of a witch and with a human heart and sources in real life. So I definitely wanted to do it, mostly because of the music and to play with this wonderful cast. I knew Rob would do it beautifully. I’m so proud of him and the film. I can’t wait to see it again. I can’t say that about all my movies.” 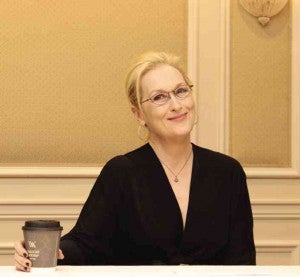 OSCAR winner longs for a vacation “to absent myself from the hurly burly.” RUBEN V. NEPALES

This is a woman who can play virtually anyone, from Margaret Thatcher to Julia Child so, who knows, she may also sing opera in real life. “Oh no,” she demurred, “I have too much respect for really great singers.”

She confessed, “I know the parameters of what I can do. I could never really sing opera. I studied opera when I was very young, 13 to 15, but I stopped. I don’t think you can get it back at 65.”

She brought up Audra McDonald as a great singer. Audra appears in Meryl’s other new film, Jonathan Demme’s “Ricki and the Flash,” which also stars her daughter, Mamie Gummer. Meryl plays an aging band member.

“In the San Fernando Valley, there are a lot of dive bars where they play cover songs of famous bands,” she said about the story of “Ricki and the Flash.” “Some of those musicians are absolutely wonderful. This is the story of a woman who’s in a band like that. A lot of them are older musicians so everybody in my band is over 65. We play rock ’n’ roll. We cover Edgar Winter, U2, Dobie Gray…”

“I am someone who left a family in the Midwest to pursue a dream in Hollywood. It didn’t work out. There’s a lot of damage in the wake of that. She goes home to try to fix it. The ex-husband is Kevin Kline and he’s divine in the movie. The other love interest is Rick Springfield who’s my lead guitarist.”

Meryl has finished filming Sarah Gavron’s “Suffragette,” about women’s fight for equal voting rights in early 20th-century United Kingdom. “I have a teeny part but Carey (Mulligan) is sublime. We’ve seen a lot of movies about civil rights. We’ve never seen this story on screen. It’s fantastic. Abi Morgan, who wrote ‘Shame,’ wrote the script. Everything in the movie is true. I mean, the events of that time, 1912 in London.

“I play Emmeline Pankhurst, who advocated violence. They submitted acts to the Parliament every year for 40 years and got a pat on the head. It was never going to happen so she had women roll baby carriages loaded with bricks down Oxford Street. They threw the bricks through the glass windows on Oxford Street. They blew up the golf course and that’s how they got the parliamentarians’ attention.” 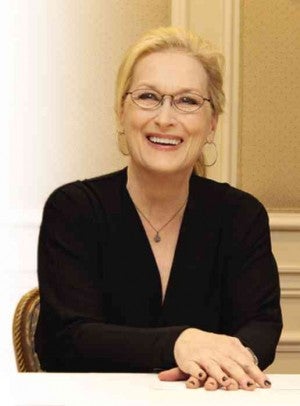 SHE REGRETS dieting and now thinks “Death Becomes Her” looks like a documentary on Beverly Hills. RUBEN V. NEPALES

She hardly has time to watch her daughters’ work. “I can’t keep up with it,” Meryl conceded. “They’re on so many shows and movies.”

The woman with formidable filmography was asked which movie she was least happy working on. Meryl answered, “I didn’t really enjoy making ‘Death Becomes Her’ because there was a lot of CGI. One of the things I loved about ‘Into the Woods’ is that the magic actually comes from real things. Even the trees were real ones, transplanted into the studio. It was just so easy to imagine the sensual world.

“There was a lot of green screen work in ‘Death Becomes Her.’ It was the early days of green screen so it was very bad and tedious. They put marks on your face. You get in a suit and you’re all alone and you pretend that the other actors are there. I just couldn’t stand it.

“I had a long plane ride back with (director Robert) Zemeckis after shooting one of the various endings that we shot. This was not in the movie; it was one we shot in Switzerland. I said, ‘After all this tech-heavy stuff, aren’t you just dying to get in a room with five actors and a hand-held camera and shoot a story?’ He said, ‘That’s my idea of hell.’

“Movie making is this thing that can embrace so many different people—different tastes and talents. Zemeckis loved all the technological stuff. The actors were like a pain in the a** for him.”

She deadpanned, “Now I look at that movie and I think it was like a documentary of Beverly Hills.”

A question about her art collection at home, especially since she’s married to sculptor Donald J. Gummer, led her to proudly volunteer, “My husband has embarked on a really interesting project. He’s going to make sculpture in front of the new American Embassy in Moscow. It’s a big deal because they had to tear down the old embassy.”

Breaking into a grin, Meryl cracked, “It was so full of bugs—and not the crawling kind.

“We have a lot of my husband’s work but we have a lot of our friends’ work as well,” she added. “We collect but not in any organized way. We have absolutely no wall space because much of our walls are taken up by things we love and gotten from friends. 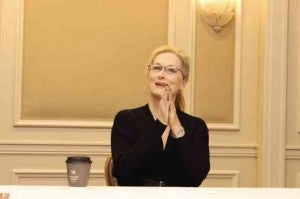 THE OSCAR-WINNING actress has been working nonstop for five years. RUBEN V. NEPALES

“I wish for a vacation,” she said with a sigh. “I want a nice break where I can go to the galleries and museums and absent myself from the hurly burly… I’ve been working nonstop for that last five years. So this ‘Florence Foster Jenkins’ will be the last for a while.”

Meryl said that like the characters in “Into the Woods,” she strives to see her remaining wishes come true. “I always wish on a star and that’s always about my children.”

As for regrets, Meryl was frank and practical. “Yes, I wasted a lot of time dieting,” she dished with a laugh. “I regret that. It was stupid thinking about it—obsessing, you know. But actresses do that. Yeah, I’m over it.”