MANILA, Philippines—If the concept of Beyoncé’s latest music video looks familiar, that is because it is inspired by the series of viral videos produced by Filipino performer Gabriel “Gab” Valenciano.

On Saturday, Valenciano confirmed on his official Facebook account that the 17-time Grammy winner’s “7-11” video was inspired by his “Super Selfie” videos.

Valenciano also said that he was asked by the superstar’s team to collaborate in making the video.

The music clip features Beyoncé dancing, acting silly, and changing wardrobes on the balcony, in the bathroom, in the living room and at an elevator lobby.

“Hi everyone, this has been a very surreal season for me, and today is quite special. This video, which apparently was inspired by my videos, is now out. I was told that she herself watched my videos and asked to bring me onboard the creative process. Unbelievable. To God be all glory. Thanks for the support everyone! Still can’t believe it.‪#‎superselfie,” Valenciano said on his Facebook account. 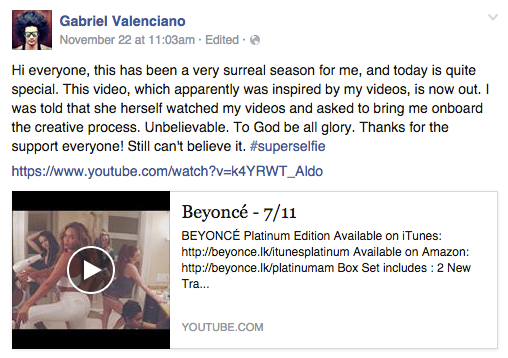 The video, which was described by critics as Beyoncé’s “most personal” video yet, has garnered more than 22 million views as of posting time.

“7-11” is part of the Platinum Edition of Beyoncé’s self-titled album.

Valenciano’s series of “Super Selfie” videos has gone viral since the first one was posted in 2013. It has been picked up by international media such as Good Morning America and Huffington Post.

Gab Valenciano dances way into auditions of ‘America’s Got Talent’