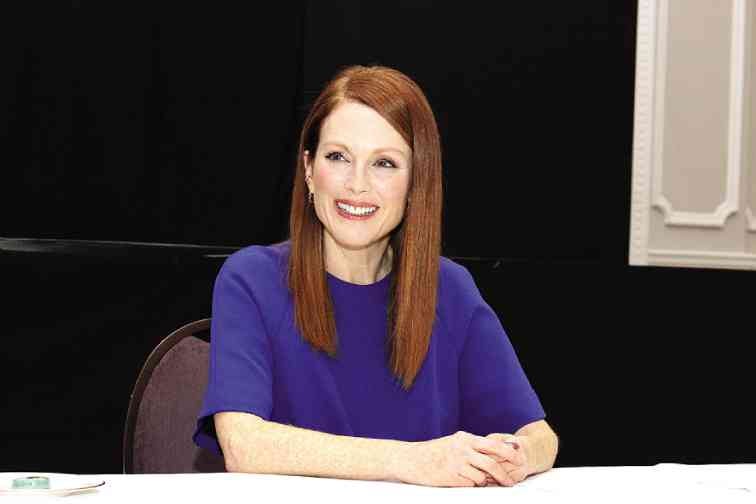 MOORE. Generating Oscar buzz for her portrayal of a woman with Alzheimer’s disease. RUBEN V. NEPALES

Los Angeles—“It’s interesting because somebody just brought that up the other day,” Julianne Moore replied when I recently asked her in London about her experience working with the two most popular young actresses today in Hollywood—Jennifer Lawrence and Kristen Stewart. “This person said, ‘My gosh, you’ve worked with two of two young female leads in enormous worldwide franchises.’ What’s been interesting to me is that they’re both beautiful and talented. They’ve worn the mantle of their success very well.”

Julianne and Kristen Stewart play mother and daughter in Richard Glatzer and Wash Westmoreland’s drama, “Still Alice.” Julianne’s portrayal of a woman fighting the early onset of Alzheimer’s disease is generating buzz that she’s the Best Actress frontrunner in this awards season.

In “The Hunger Games: Mockingjay-Part 1,” Jennifer’s Katniss Everdeen finds herself in District 13 of Panem and obliged to align with Julianne’s President Alma Coin.

“They’re incredibly talented young women and have been great partners,” Julianne added about Jennifer and Kristen who are coincidentally both 24. “I don’t remember that happening (to me) when I was younger. We didn’t have these big franchises. So, I’ve been impressed by both of them, by the depth of their talent and ability to navigate these really difficult waters. I feel lucky to have worked with both of them.”

In an earlier interview, the redhead added about Jennifer: “She is remarkable!—She really is! She’s young, but she’s poised, very witty, has a smart mind, very talented … She has this big franchise on her shoulders, but she’s gracious, lovely and funny.”

On Kristen’s “Twilight” franchise costar, Robert Pattinson, with whom Julianne costars in “Maps to the Stars,” the 53-year-old actress said, “Robert’s looks belie who he is inside. He has this formidable, very beautiful face. He’s such a gorgeous guy. He looks like he would be remote, but the minute I met him, he was very chatty. He’s very funny. He’s knowledgeable about film. He loves acting, actors and movies.

“Robert talked the entire time. I have to say I was shocked because I didn’t expect it. I mean, he’s so friendly, truly delightful, smart and talented. I loved him right away!”

Julianne also worked with another British actor, Eddie Redmayne, in 2007’s “Savage Grace,” where they played mom and son. “Eddie is a wonderful actor,” she said. “He was incredibly prepared. I remember that we held auditions in New York. There was a handful of young men that we saw. I think Eddie was 19. He was clearly the only one for the job the moment he read.

“The actors were all really talented, but when Eddie read and he was done, I looked at the director, and I was like, that’s it! He was our only choice. He was so suited for the part. He had done a tremendous amount of work. He was always great, so interesting and fragile, so definitively that part. I am not surprised with the success he’s had.”

Watching Philip Seymour Hoffman as Plutarch Heavensbee in “Mockingjay-Part 1” reminded me of cinema’s loss. “It’s a great tragedy, a tremendous loss,” Julianne agreed about her costar’s demise. “Phil was one of the great actors of my generation. I remember the first time I saw him was in ‘Hard Eight,’ which was Paul Thomas Anderson’s movie. It’s one of Phil’s movies before he made ‘Boogie Nights.’

“I was struck by Phil’s talent and his energy—his sense of being alive on camera. He’ll be sorely missed. We were devastated by the loss, and we really feel for his family!”