Film fest in San Francisco to start with ‘Weng Weng,’ end with ‘Rekorder’ 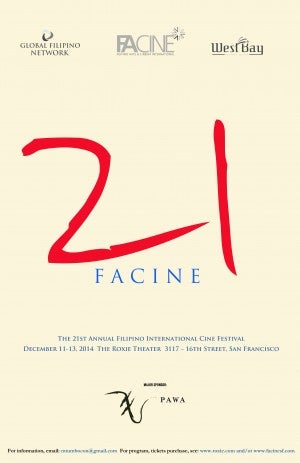 The film festival will close on December 13, Saturday at 9:00 p.m. with the critically acclaimed Mikhail Red debut film “Rekorder,” an urban thriller about a videographer who unwittingly gets involved in a murder.

The annual festival has been the premier showcase in the United States of new Filipino works and Filipino film classics for the past 21 years. It is organized by FACINE or Filipino Arts & Cinema International, a not-for-profit media arts organization based in San Francisco, which aims to advance the interests of cinemas from the Philippines and the Filipino diaspora.

Festival co-presentor West Bay Pilipino Multi-Service Center is the oldest Filipino nonprofit social service agency in Northern California that provides services to Filipino and other low-income families of color, including college preparation assistance for the youth.

Co-presentor Global Filipino Network, a California-registered nonprofit, aims to connect and empower Filipinos across the globe through education and outreach, using media and technology.

The festival will be the occasion for the gala screening of the much-awaited Mes de Guzman’s “Ang Kwento Ni Mabuti/Mabuti’s Story,” starring the Philippine superstar Nora Aunor on Friday, December 12 at 7 p.m.

A wide array of new works by filmmakers from the Philippines and the Filipino diaspora on varying subjects and genre will be presented in different programs.

Major sponsor of this year’s festival is PAWA or the Philippine American Writers and Artists, Inc., a nonprofit organization of Filipino American writers and artists whose main goal is to create and encourage literature and arts for the preservation and enrichment of Filipino and Filipino American historical, cultural and spiritual values.

Read Next
Alive and kickin’ Halloween with Mr. Big
EDITORS' PICK
Shop smarter with vivo’s big 12.12 holiday deals
House energy committee chair Arroyo bats for cheap electricity
How not to retire as an ex-president
Lawmakers eyeing more changes in Maharlika plan
Hidilyn Diaz wins only gold missing from her collection
The vivo Y02 is now available in the Philippines for only PHP 5,299
MOST READ
Jovit Baldivino, ‘Pilipinas Got Talent’ winner, dies at 29
Andi Eigenmann, family in Manila for a quick visit; Ellie dines with grandma Jaclyn Jose
LPA enters PAR, to likely strengthen into tropical depression in coming days – Pagasa
Lawmakers eyeing more changes in Maharlika plan
Don't miss out on the latest news and information.