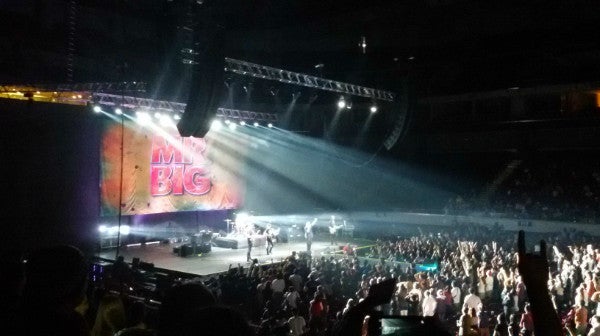 MANILA, Philippines – It was almost Halloween; people were on their way to their respective provinces to spend the weekend with their families. But there we were, October 31, at the SM Mall of Asia Arena, gathered for what seemed to be just the right treat before tucking ourselves in some serene All Saints’ and All Souls’ Day observance.

“Gotta Love the Ride” we thought, and that was quite exactly how Mr. Big’s Halloween show in Manila kicked off.

Eric Martin, Paul Gilbert, Billy Sheehan and Mr. Big’s drummer for the tour Matt Starr were all set to bring the house down and they did with “Daddy Brother Lover Little Boy”, “American Beauty”, and “Undertow” – indeed a heavy song line up for a start.

We were just four songs past the show’s opening, but we were treated right away to a classic duel between the bass and the guitar. What an early dose of Sheehan and Gilbert’s expertise on the strings, but nobody really complained as that was exactly what people were there for, the classic Mr. Big rock sound.

Martin on the other hand demonstrated what it means to be a singer from the ‘80s. Despite sounding like he was running out of voice a few days before the concert, what he brought to the stage was a full-blown Mr. Big experience filled with distinct ‘80s screeches and screams, and the man didn’t even sound his age while doing so.

And before the concert reached halfway, Pat Torpey joined the band on stage as back-up vocal with tambourine on one hand.

And then Mr. Big’s Halloween crowd was treated to “Alive and Kickin”, “I Forget to Breathe”, “Take Cover”, “Green-Tinted Sixties Mind”, and “Out of the Underground”.

Gilbert and Sheehan were later on given time to own the stage separately. Gilbert sounded like a guitar-drummer in one with his foot-stomp-accompanied guitar solo, and Sheehan simply played the bass as if it was lead. No big deal.

Shortly after bidding the audience a supposed “goodbye,” Mr. Big went back on stage to play its big 1991 hit “To Be With You”.

It was followed by a track carrying the same title as the band’s new album “The Stories We Could Tell” and then “Collorado Bulldog”.

For “Living After Midnight”, Mr. Big then again showcased a collective talent that’s quite rare in today’s music industry. Torpey sang, Starr played the rhythm, Martin was on the bass, Sheehan this time played the real lead, and Gilbert, he owned the drums.

See, even if Mr. Big is way beyond your time, it doesn’t really matter. Because the talent that is within the band, it remains. And what remains is special.

Halloween was great. Thanks to Mr. Big.

Mr. Big wants to be with you on Halloween