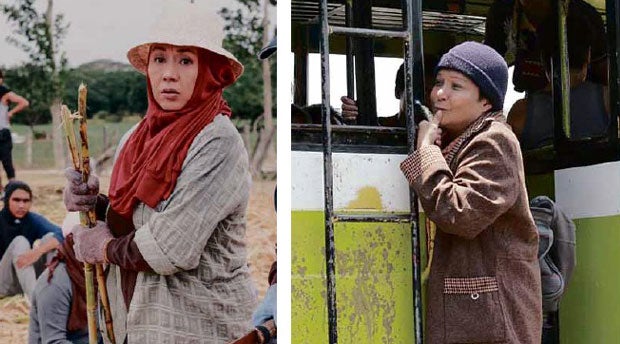 CONSIDERED among the best films of 2013, “Ekstra,” starring Vilma Santos (left), and “Ang Kwento ni Mabuti,” top-billed by Nora Aunor, will be shown on Nov. 29.

“In New York, micro-cinemas— or art-house cinemas with an average of 60 seats— screen independent and foreign-language films,” Nebrida told the Inquirer.

In Brooklyn, he added, certain bars and restaurants have become alternative viewing venues, and they serve drinks and meals on the side. (Teatrino in Greenhills has started a similar experiment—minus the food and drinks.)

The “Inquirer Indie Bravo!-Fully Booked Film Festival: The Best of Filipino Films 2013 Plus” will be held at the U-View in Fully Booked High Street, Bonifacio Global City, from Nov. 21 to Dec. 12.

The 60-seat U-View is an example of a micro-cinema. The Fully Booked marketing team explained why alternative venues should be encouraged: “Not all big cinemas can take on the full range of Filipino films. Smaller venues are growing around the Philippines. Such places facilitate the distribution and screening of indie films that may otherwise not see the light of day.”

Indie film audiences and the bookstore’s regular market intersect. “Both groups are thinking and literate,” said Nebrida, one of the programmers consulted by fest organizers.

Not only in books

“Good stories are not limited to the pages of a book,” added Aimee Diego, ad and promo manager. “Some of the greatest stories are told via songs or films.”

Last year, Philippine cinema churned out a bumper crop of acclaimed, independently produced films—as can be gleaned from Inquirer’s consistent coverage of the indies. Developments in the local cinema scene are regularly reported in PDI’s Indie Bravo! section.

The bookstore acknowledged the vital role played by the Inquirer, with its Indie Bravo! advocacy, in popularizing nonformula films and screenings in alternative venues.

“Filmmakers, especially the new ones, need the kind of support that the Inquirer provides,” Diego and Yulo agreed. “It’s a beneficial partnership…filmmakers furnish content and media outlets give the sustenance needed in promoting awareness of the films.”

For the Inquirer Indie Bravo!-Fully Booked Film Festival, at least 35 films, culled from various local fests, will be screened.

Said Yulo: “Collaboration made this extensive lineup possible. We salute our partners

…the Film Development Council of the Philippines and the National Commission for Culture and the Arts for cosponsoring the event and providing select works from Sineng Pambansa and Cinema Rehiyon. We are grateful to the different festival directors, programmers and filmmakers of CineFilipino, Cinema One, Cinemalaya, Metro Manila Film Festival New Wave.”

The team specially thanked Nebrida “for helping us round up the programmers and filmmakers.”

“Such variety shows the kind of year we had in 2013,” said the marketing team.

For inquiries and reservations, call (632) 8587000 or visit fullybookedonline.com and facebook.com/fullybooked.