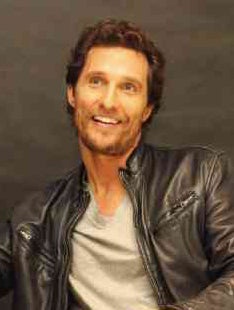 MCCONAUGHEY. “Marriage is just the beginning of something much more glorious.” RUBEN V. NEPALES

LOS ANGELES—“Thank you—it’s my face creams,” Matthew McConaughey quipped when complimented about looking good at 45. It’s especially good to be Matthew McConaughey these days. After winning the Oscar and Golden Globe for “Dallas Buyers Club,” he turns in another stellar performance in, well, “Interstellar.”

Matthew, bearded and rugged in a gray tee, black leather jacket and jeans, talked in his hypnotic Texan drawl about working with director Chris Nolan in the sci-fi blockbuster, how he approached one particularly wrenching scene, his marriage to Camila Alves, parodies of his cryptic Lincoln commercials, and the second season of “True Detective” minus him and Woody Harrelson.

You have a powerful, emotional scene in the movie. Can you talk about how you prepared for that scene?

Every script will have a scene or two—you can put a proverbial thumbtack on it and go, boy, this has to work emotionally for the story to work. That was one of those scenes. I know, going into the scene—and I will try not to give spoilers away—but, what I was going to see and react to, I didn’t want to see beforehand.

Also, on that morning, I went to Chris and said, “We should shoot the first take and no rehearsal.” I don’t want to plan a reaction, because I think that on a first take, if I am relaxed enough, what happens there should be the most truthful. So, we shot that scene the first thing on a Monday morning, and it was a great way to start a week (laughs).

Was Chris everything you expected him to be?

Yeah—and then some. When I read the script, I went, whoa, Chris has done some really ambitious films, and he turns abstractions into realizations. He has concepts of his own world, and he gives you rules to that world. I went, wow, this is more ambitious in scope and scale than anything he has done. At the same time, it felt inherently much more personal and intimate.

I started to realize that the father and daughter story and epic science-fiction adventure elements were not two separate things—that they were actually integral. The further out we go in scope and scale, the more personal the story is and the more we find out that it’s about you and me. So, I felt that Chris was after something more. I went into the film knowing that Chris is going to be much more of a perfectionist than he was.

Chris is a tremendous leader. If you’re going to shoot with him, it’s going to be hard and long. It’s an endurance test but, every day, he will be at the front of the pack. You are not going to outwork him!

Also, the scope and size of the picture in no way made me feel as an actor that it was more important than the human aspect. They did not make me feel overwhelmed, that I was lost in the middle of all these set pieces.

In this movie, you play a very smart guy. What kind of a student were you?

I was pretty much a straight A, one B student. Grades were a big thing to my parents. I had a happy childhood life because my grades were good, and it made my parents very happy.

How has marriage (to Camila Alves) changed your perception of love and relationship?

My wife and I spend a lot of time talking to couples who are successfully married. We talk to our pastor. We studied the different histories of marriage and what it is about. We got a much better understanding of what that covenant can mean. The whole new, larger adventure is just beginning. It’s not like the adventure is over. It’s not like the end of something.

Marriage is the beginning of something much more glorious than you could ever understand.

What do you think of the parodies of your Lincoln commercials?

I haven’t seen any of them. I hear that they are pretty funny. I don’t see them as making fun of me. I see them as a compliment. I see why people think the commercials are funny. I knew, while making the commercials, that there was something different about them. We are so serious in them.

Do you have any regret about saying no to the second season of “True Detective”?

I don’t regret saying no to a second season. That (first season) was about 450 pages of script, and I worked five, six months on it. I was fine for that. It had a beginning, middle and an ending for Rust Cohle (his character). I don’t know where the story would have gone from there. I am someone who likes to do different things. I wouldn’t have done it if I had to sign on even to guaranteed three seasons of success.

The last two years have been tremendous for you. How has it changed you?

We still have the trailer that the whole family lived on for about a month and a half while we were shooting this film. We still have the family. That’s a good thing, right? And that family is growing. I have more choices and more things, absolutely. I am still going to ask myself the selfish questions of what kind of personal experience can I have in making a movie. And, the process of making a movie, can that be enough? I want that to be enough.

The coming together with a bunch of experts and all knowing what we are after, but still not knowing how exactly we are going to get there— that’s my favorite part of my career and my job. As much as I can talk about all the other stuff and that I’m thankful for certain results, the best thing to do is go, “OK, what are we doing?” We’re going back to work—that’s a very simple thing, and that’s where I am the happiest!