Still doing what they do best 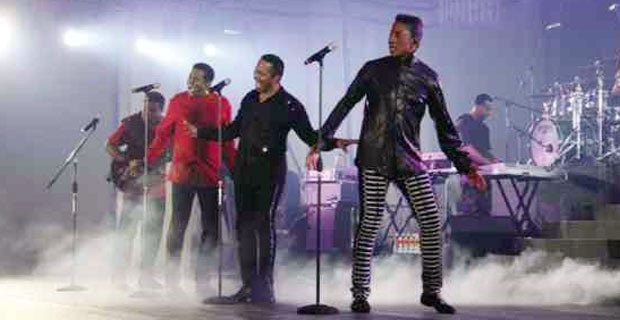 THE SHOW was wonderfully brisk. Every so often, the image of a young Michael would flash and fade, prompting the audience to erupt into cheers.

The opening lines of The Jackson 5 song, “We’re Here to Entertain You,” couldn’t have more aptly described the musical journey that the iconic pop boy band has been on since the 1960s:

“When we were tiny little boys / We used to dance, we used to sing / Before we even learned to crawl or walk / As we grew up we didn’t change…”

Jermaine, Marlon, Tito and Jackie—the surviving members of the group now called The Jacksons—are well in their 50s and 60s. The harmonies may not be as consistently smooth, the moves not as slick; still, they were every bit as engaging in their recent concert at the plush Grand Ballroom of Solaire Resorts and Casino in Parañaque City.

Natural performers that they are, The Jacksons wove magic the minute the lights beamed down the stage and the speakers crackled to life. They opened the show with the 1980 hit “Can You Feel It.” By the time they dished out the second song, “Blame It on the Boogie,” not a few fans had crowded around the stage, determined to dance the night away.

It was noticeable early on that, in the absence of the siblings’ late younger brother, the King of Pop, Michael, Jermaine was the vocal anchor, taking on the lead in many of the numbers. Marlon was the most dynamic dancer—kicking, twirling and gyrating to the beat. Tito and Jackie took the less assuming, but still very important, roles of guitarist and backup vocalist, respectively. Together, they were one with the music.

The concert was wonderfully brisk, with the music stopping only to give way for the showing of montages of old photos and video clips of interviews featuring the boys’ parents, Katherine and Joseph, as well as Berry Gordy Jr., founder of the now legendary music label, Motown. Every so often, the image of a young Michael would flash and fade, prompting the audience to erupt into cheers. 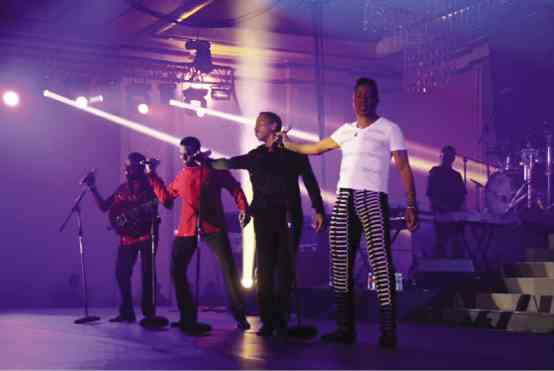 BY THE second song, fans were dancing away.

The music was alternately funky and groovy, slow and soulful. This was best appreciated in a rousing medley of classic The Jacksons hits that started with “I Want You Back” and “ABC,” and ended with “I’ll Be There,” which had everyone singing along and waving their hands in the air.

Toward the end of the show, Jermaine got a solo spot, which he used not only to prove his vocal mettle via songs like “Dynamite” and “Do What You Do,” but also to honor Michael’s legacy. In what proved to be the evening’s most poignant moment, an emotional Jermaine sang Michael’s 1993 ballad “Gone Too Soon.”

Clad in sparkly costumes matched only by the ostentatious chandeliers hanging over the audience members’ heads, The Jacksons reignited the energy with their robust performances of such fan favorites as “Don’t Stop Till You Get Enough” and “Shake Your Body.” The fans—some of whom dressed as Michael—never let up.

Watching things unfold, one couldn’t help wondering how a reunion show like this would have turned out, had Michael been around still to share the spotlight. But in the end, The Jacksons showed that, to this day, Jermaine, Jackie, Marlon and Tito remain dogged performers. They came to entertain, and they surely entertained well. ([email protected])