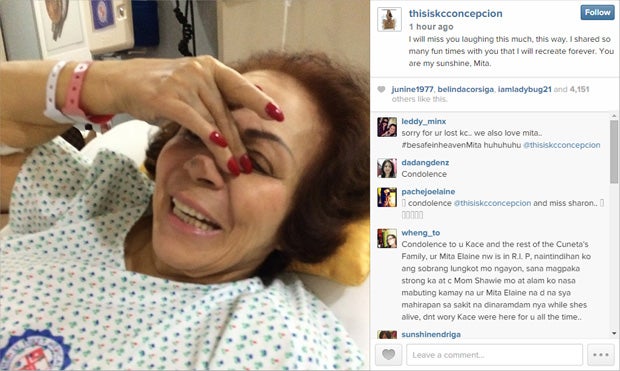 MANILA, Philippines—Elaine Gamboa Cuneta, 79, passed away due to internal bleeding and complications from abdominal surgery, her family said in a statement on Wednesday.

“The family of Mrs. Elaine Gamboa Cuneta wishes to confirm the news that at 2:05 p.m. today, November 5, 2014, she passed away due to internal bleeding and complications arising from abdominal surgery.

“Mrs. Cuneta was first confined for abdominal pains on September 2 and was in intensive care for over seven weeks.

“She was the wife of the late Mayor Pablo Cuneta.

“Her children, Chet and Michelle, Sharon and Kiko, her grandchildren—KC, Paul, Chuck, CP, Christopher, Daniel, Czarina, Lucas, Frankie, Miel, and Miguel, her siblings—Paz, Betchie and Johnny, Gilbert, Vernon and Esther, Carmela and Paquito, Helen and Tito, Edna and Jing, and Evelyn and Bong, and all their children are profoundly saddened by her passing.  Mrs Cuneta was 79 years old and the daughter of the late Domingo Gamboa and Eusebia Albent.

“The family is deeply grateful for the outpouring of sympathy, love, and prayer support during their time of grief. They thank all the doctors and nurses who did the best they could to care for Mrs Cuneta these past few months.
“They are comforted by their faith and the certainty that she is in a good place, in the hands of her Creator— no pain, no sickness or weakness, and seeing Jesus face to face.

“It has been a very difficult time for the family, especially for Sharon, Chet, KC, and Mrs. Cuneta’s brothers and sisters, and it is their hope that they may be allowed some privacy as they mourn the loss of the beloved Mrs. Cuneta.

“The wake will be held at the Capilla Del Señor and Capilla Dela Virgen of Santuario de San Antonio Parish, McKinley Road, Makati City from November 6 to 11, 2014.  Details of the interment will follow.”