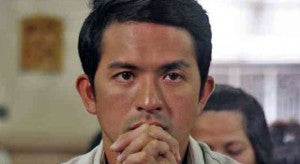 MANILA, Philippines — At least six schoolchildren, including the son of actor Dennis Trillo, were taken to the hospital after two school vans collided in Quezon City on Tuesday morning.

The school services of Xavier School and Malayan High School of Science collided at the intersection of Speaker Perez and N. Roxas Streets in Barangay (village) Lourdes at 5:45 a.m., causing slight injuries to some of the student passengers.

The driver of the Malayan school carrier (TXF-527), Jerry Lito Papa, 45, was ferrying two 15-year-old students, who were his son and his niece, along Roxas Street heading to Tuazon Street.

Chief Insp. Diogenes Amor, head of the Balintawak traffic sector covering the area, said when the two vans collided bumper to bumper at the intersection, the impact was so strong it pushed both vehicles off-course.

The Malayan school carrier veered to the right and ended up slamming into a concrete wall, and the Xavier school van went crashing into an electric post to the left.

Amor said in an interview the students sustained only slight injuries such as grazes, but were taken to the hospital just the same as a precaution. Some of the children were taken to the Chinese General Hospital and the others to the Jose Reyes Memorial Medical Center.

Amor quoted Padios as saying that one of the seven-year-old passengers on the Xavier van was the son of actor Dennis Trillo with beauty queen Carlene Aguilar. The boy sustained no injuries but was taken to the hospital anyway, Amor said.

As both drivers refused to admit they were to blame for the accident, and only pointed to each other as the one at fault, Amor said the police will file complaints against both for reckless imprudence resulting in damage to property and multiple injuries.

“We will file a case against both for the parents of the victims. It will be up to the prosecutor to determine who to file charges against,” Amor said.

Investigators surmised that based from the impact of the collision, both vehicles were speeding, Amor said. But Amor also quoted residents as saying that the intersection was accident-prone.