How to win the Manila concert audience the MAGIC! Way 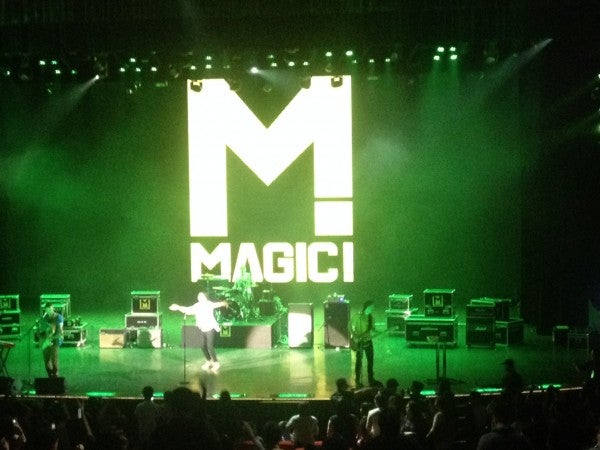 It’s always tricky when relatively new music artists fly in to the Philippines, concert equipment in tow, expecting a crowd turnout that could rival shows of bigger artists. Of course it doesn’t always work that way, especially when numbers talk—number of hits, number of albums, number of awards, and number of shows sold out.

So it was definitely kind of risky for a neophyte player like Canadian reggae band MAGIC! to come over to Manila on October 22, 2014 for a one-night gig. MAGIC!, still with just a few hits under their belt, may have chosen to perform to a smaller crowd in a more intimate and comfortable environment offered by the cushioned seats and padded walls of the Newport Performing Arts Theater at Resorts World Manila, probably to control expectations from their would-be audience and even themselves.

However, what would transpire on the night of their concert would be something worth remembering, whether you’re a fan of the band or not. MAGIC! armed itself with all the right arsenal to capture the hearts, minds, and souls of the local audience who are used to music acts with a lot of cover songs to produce. With that in mind, I present to you the ways to win Manila audience, the MAGIC! way:

1. Start your show within the bounds of “fashionably late” schedule, making sure people do not wait for the performance to commence after two hours from the supposed concert time.

2. Have a local band like Save Me Hollywood as front act for your show and make sure they get their share of the limelight while the crowd earnestly wait for your entrance. Let them perform their own original songs. For Save Me Hollywood it meant doing their own songs while filling random bars with Miley Cyrus song lyrics. They even sang Rude, which is weird when you really think about it. They may be your frontliner to unresponsiveness or total nonchalance but they are there to encourage and engage the audience. People will love them in the end.

3. Create an audio montage of anything and everything magic—song clips, skits, dialogues, monologues—to signal your impending arrival while your crew work on last minute sound checks, ultimately preventing your audience from sinking into abject boredom.

4. Finally appear on stage. Beam, rock the stage out to excite the crowd by immediately starting your set with three songs of your first hit album. For MAGIC! it meant playing the upbeat Stupid Me, the Police-sounding Mama Didn’t Raise No Fool and No Evil. Tell everyone to come down near the stage because what the heck, as hardcore fans they deserve to be in the front row.

5. Show your killer dance moves while singing in front of the audience, especially if you do have it, as in the case of vocalist Nasri Atweh, who knew a few smooth moves to hype up his performance. This will ensure getting shrieks and fangirl screams from the crowd. Bump it, grind it—people will love it.

6. Start infusing styles that made you famous to begin with. Reggae is what MAGIC! is known for so that’s what they gave the crowd. Display some weird, colourful imageries on screen and let the crowd just digest all of that while everyone bops to your beat. 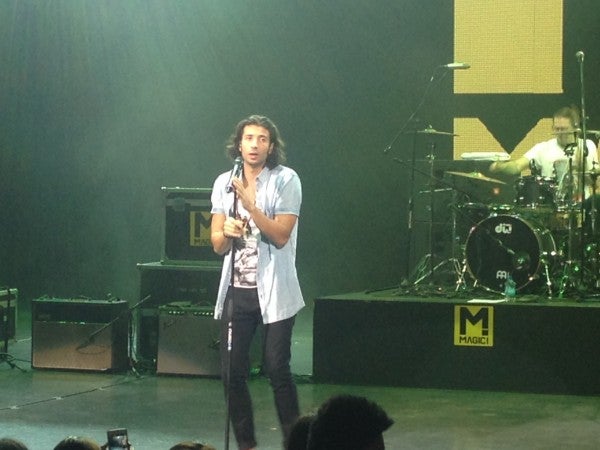 7. Share the spotlight once again by introducing the rest of the band. Nasri Atweh followed this by heart, introducing guitarist Mark Pellizzer, bassist Ben Spivak and even going as far as peddling their really good-looking drummer Alex Tanas, to the delight of the predominantly female audience.

8. Talk to your fans. Let them know how much it warms the band’s heart that they are showing much love for you. Nasri Atweh tells the audience, “you guys are loving.” That’s how any frontman should address any audience—with much sincerity. Have small talks in between sets. The crowd deserves to know more about your band. Nasri recounted his small beginnings in Toronto and how he started his music career as part of a boyband with three Filipino guys as members, further adding that this is the reason he loves Pinoys.

9. When the crowd starts to become more receptive, break out into other original songs. For MAGIC!, it meant singing No Way No and Paradise. Who cares about people not knowing the lyrics to your songs because they’re so busy appreciating your frontman’s hip gyrations? Make the audience adore you even more.

10. Take a quick rest, but don’t stop the chatter. Have random surveys off the crowd. Nasri asked the women, “Ladies, do you wanna have some fun?” Of course, they will want to have some fun. That was the band’s perfect cue to perform their riveting cover of Cindy Lauper’s Girls Just Wanna Have Fun. Do some sexy dance to your guitarist’s wild riffs because it complements your ovary-explosive husky man voice.

11. Play one more original song from your album. For MAGIC!, it meant playing Don’t Kill The Magic.

12. Save the best for last. This makes or breaks your entire concert because this serves as the common ground for people. Drum up interest by asking the crowd if they’re ready to hear that song that catapulted you to the top of the charts. Let them scream in anticipation; the finale should be worth the wait. For MAGIC!, it meant finally giving what the audience have waited to hear all night, and that is Rude.

13. Don’t do an encore. Let the crowd want more of your music. But instead of being a snob and just leaving the stage altogether, stay for a few more minutes. MAGIC! did just that, even high-fiving the crowd and photobombing their selfies. Start gnawing in the minds of people because it’s become apparent that your band has really, really arrived.

Honestly, I could have been watching the next big band of the decade. And with that, trust me when I tell all of you, I’ll say yes the next time they come over here for another concert.