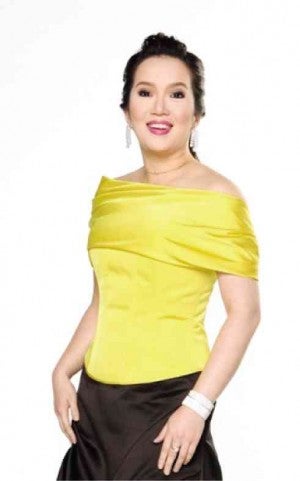 AND IT’S a “no” just now to public office and romance: “Who wants a girlfriend with all these followers on Instagram?”

TV host Kris Aquino on Wednesday said she would not run for public office in 2016, but “at some point in your life, you should be able to give back.”

The sister of President Benigno Aquino III enumerated conditions that she has set for herself before even thinking of throwing her hat in the ring: “No. 1, Bimby has to at least be a teenager. I don’t want him to say, ‘My mom was never there.’ As a show biz personality, my schedule is hectic as it is. What more if I pursued a [career in politics]?” Bimby is Aquino’s son with basketball star James Yap. The father of her older son Joshua is actor Phillip Salvador.

She also wants to start a business, Aquino said. “It’s important that I have business acumen, which all Filipinos need. Even our leaders should have business expertise.”

Aquino recently inked a franchise deal with fast-food chain Chowking. She will open her first branch at Ali Mall in Cubao, Quezon City, this month.

“It is my first venture that is not related to entertainment. The capital for this is the profit I made from the movie ‘My Little Bossings’ (which she coproduced with Vic Sotto),” she told reporters over lunch on Wednesday.

Aquino’s talent contract with home network ABS-CBN is up for renewal in 2016. “That is my 30th year in the business. I should be realistic. If my [show biz career] ends, and a new chapter in my life begins, it’s OK with me,” she pointed out. “I just want to save enough to take care of my two sons. By then, Bimby will be only 9 years old; and we all know that Josh needs lifelong care.” Josh has autism.

Aquino said it was her best friend and “The Buzz” cohost Boy Abunda who inspired her to venture into an enterprise other than show biz. She explained: “When Boy got sick, I realized… what if that happened to me—knock on wood—and I became indisposed for months? What would happen to my kids? I realized I needed a source of income that would not depend on me being physically present every day.”

In August, Abunda underwent surgery to remove abscess in his liver.

The TV host added, “I set a figure—when I’ve raised this amount, then I can retire. I don’t mean I’ll stop working; I’ll just lead a less-public life. I’m close to reaching that figure.”

Kris is currently working on the sequel to the hit “Feng Shui” by Chito Roño. She said the horror movie, an official entry to the 2014 Metro Manila Film Festival, was experiencing production delay.

In September, Picache’s 75-year-old mother was found dead in her Quezon City home.

As for romance, Kris said, “Now is not the time for it. Who wants a girlfriend who has all these followers on Instagram? When I no longer need to post things happening in my life, then maybe I can finally have a private life.”

A ‘flighty’ Q&A with Kris Aquino: Why endorse Jejomar Binay?

Read Next
Did you know…
EDITORS' PICK
‘A greener, cleaner tomorrow’: A how-to guide for Filipinos who want to help with today’s energy crisis
SM continues to send relief assistance to remote towns in Batangas
Get exciting deals and discounts when you download the new McDonald’s App
Bato to reapply for US visa if Duterte wants him to join US-Asean summit
US Navy helicopter crashes in PH sea; 5 crew members rescued
Batangas execs, Taal evacuees thank House; hopeful on rehab efforts
MOST READ
Taal’s sulfur dioxide emission increases
No time for revelry; Tagaytay instead plans for alert level 5
Seized food items from China tested positive for ASF–BOC
US Navy helicopter crashes in PH sea; 5 crew members rescued
Don't miss out on the latest news and information.