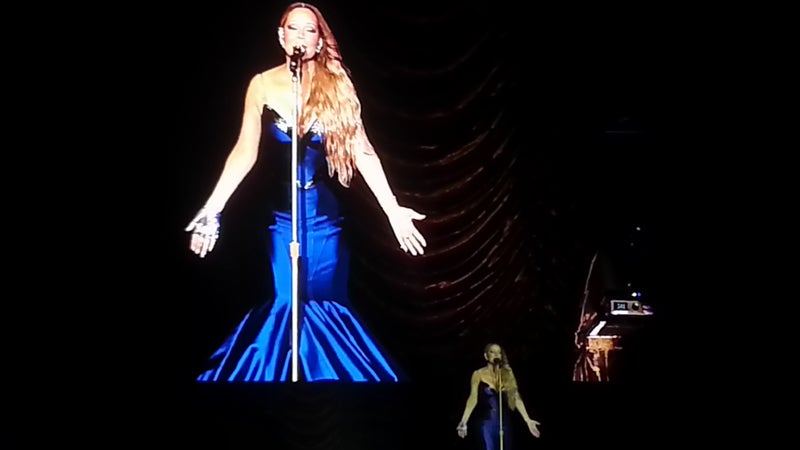 Mariah Carey in concert at Mall of Asia Arena. Photo by Pocholo Concepcion

MANILA, Philippines–Mariah Carey redeemed whatever tarnished reputation she may have suffered in the past few weeks by turning in a good performance on Tuesday night at the Mall of Asia Arena, which ended the first half of her Asian-Oceania tour to promote her “Elusive Chanteuse” album.

Like a true professional musician, the singer took control of her vocals, knowing when to change keys and improvise on her songs’ notes so as not to embarrass everyone especially herself. She even flaunted her vaunted whistles toward the end of some numbers, much to the delight of her Filipino fans.

Though her aging pipes sounded a far cry from her peak years as a pop diva, Carey nonetheless pulled through–not necessarily with flying colors, but with enough high marks to still be considered relevant.

Read Next
Comedienne-singer cleans up her act
EDITORS' PICK
Geek out at TOYCON 2022 powered by Smart Signature
UK’s Boris Johnson will resign, BBC reports
High-risk pregnancy: Reducing your risk is in your hands
House energy committee chair Arroyo bats for cheap electricity
High inflation: Your P1 is now worth only 87 centavos
Unemployment rate up to 6% in May
MOST READ
Suspect in grisly killing of missing woman in Bulacan arrested
Hong Kong suspends flight bans as it eases COVID-19 rules
Kim Atienza’s daughter flaunts bikini body in response to critics of her ‘revealing photos’
Cop slain in Isabela ambush
Follow @Inq_Lifestyle on Twitter
Don't miss out on the latest news and information.