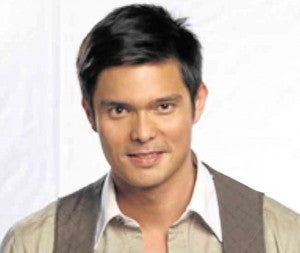 MANILA, Philippines–The Commission on Elections has tapped the help of actor Dingdong Dantes, a member of the National Youth Commission,  in its campaign to encourage the youth to register for the next elections in 2016.

In particular, Dantes, a namesake of Comelec Chairman Sixto Brillantes as his real name is Jose Sixto Dantes III, is the newest face in the election body’s online registration project “iRehistro.”

Dantes said the youth sector, which comprises a big percentage of the voting populace, should assert its right of suffrage and registering as a voter is an important step in determining the country’s next leaders.

The online service is part of Comelec’s goal to make the registration and validation process easier.

The project provides for on-line accomplishment of  voter registration forms as well as an opportunity for applicants to schedule their preferred time to register.

Under the system, applicants only need to visit www.iRehistro.com or www.comelec.gov.ph to fill out the form and print three copies, which they will bring to the Office of the Election Offcers (OEOs).

Both Dantes and Brillantes expressed confidence that the iRehistro system can decongest the OEOs of long queues during the registration period.

Currently, I-Rehistro is only available in the National Capital Region, but there are plans to eventually implement it nationwide. For overseas absentee voters, the system will be available in Madrid, Spain.

Meanwhile, more than six million voters still stand to be disenfranchised if they fail to have their biometrics taken by the Comelec in time for the May 2016 general elections.

Brillantes said that so far only three million of the 9.3 registered voters have validated/enrolled their biometrics data since they began the registration process last May.

Under Republic Act No. 10367, registered voters with no biometrics will be deactivated for the succeeding elections, and thus, be disenfranchised.

Biometrics data refer  to the automated identification of an individual particularly his/her photograph, fingerprint, and signature.