Meet The Script: Danny O’Donoghue (vocals, piano), Mark Sheehan (vocals, guitar), Glen Power (vocals, drums), three Irish men who are as direct, as impassioned as their songs; the one-time studio whizzes that have stepped up to form a band, then, on their last album, stepped front and center. It was called #3 and featured the trio on the artwork. It did exactly what the no-nonsense cover and title intended.

“The last album was us stepping out in to the light,” affirms Danny, as impressive a speaker as he is a frontman, but now with a top-spin of telegenic confidence, courtesy of his two seasons judging on The Voice on BBC1. “We’d been the faceless band before that,” he adds with typical candour. “We’d had two albums that were enormously successful but there was a disconnect – people might know the song but they wouldn’t know the band, or the name of the band.” 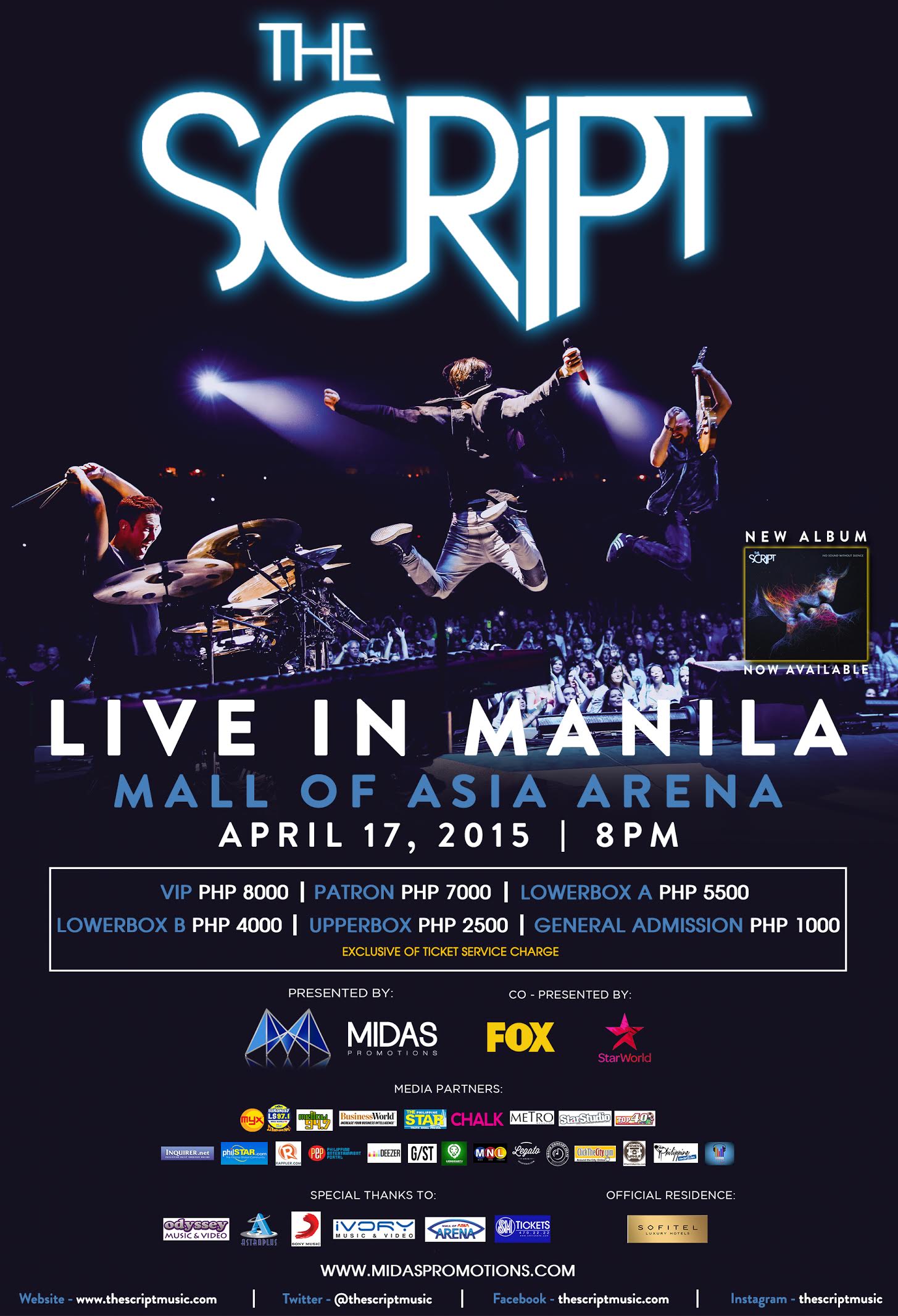 But their 2012 worldwide smash Hall Of Fame – a collaboration with Danny’s Voice co-judge Will.I.Am  – changed all that. “That song put it in no doubt who this band were,” nods the singer. “We went full frontal. We went from being the alternative Irish pop/rock to the mainstream. And that was partly achieved by The Voice,” he acknowledges, explaining his band-focused reasons for taking the telly gig in the first place.

“The excitement and energy went off the Richter scale,” continues Mark. “And it did that in America too. As we’ve toured and toured there, people are coming back to the shows, bringing their friends and their parents – a real cross-section of people and ages. It’s a great thing to have that broad appeal. It’ll give us longevity.” “It feels like a festival crowd every time,”  adds Glen.

Such was the impact of The Script’s newfound live power.

The Script’s fourth album,  No Sound Without Silence, is the sound of a band firing on all cylinders and channelling the momentum of their last, rocket-powered campaign. They finished touring #3 at the end of last year, took a scant couple of weeks off, and then quickly re-entered their studios in London and Dublin.

Without Those Songs  is a road song of a different kind. It was written after a visit to the Rock And Roll Hall of Fame in Cleveland, and is The Script’s hymn to the power of classic songs, and of classic songwriters. Then there’s  No Good In Goodbye, destined to join Breakeven, For The First Time and The Man Who Can’t Be Moved as a live sing-along favourite.

Says Danny, “that’s all we try and do: condense complex thoughts down to really simple songs. With that one, we wanted to put a twist on a word: where’s the good in goodbye, where’s the fair in farewell… Then we tried to make that into a lyrical idea, which seemed to work really well.”

The Script have scored a huge amount of success globally – they have sold over 20 million records, and all 3 have been multi-platinum throughout the world. Hall Of Fame, the lead single from last album #3, was a worldwide #1 single with over 5 million sales, 133 million Youtube views, and over 100 million Spotify plays. The Script have done especially well Stateside, where they have 5 Platinum singles and have sold over 1 million albums. Their #3 world tour spanned 11 months, and saw them play sold out arena shows in Europe, North America, Asia and Australia including 2 shows at London’s O2 Arena.