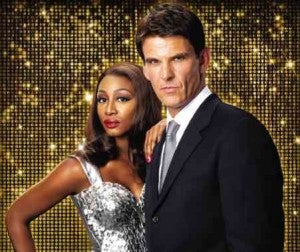 Truth is, we were ready to see a kitschy show that predominantly banked on Whitney Houston’s jukebox staples to buoy up its trite and overwrought love story. Instead, we ended up getting swept off our feet by director Thea Sharrock’s staging innovations and the musical’s fresh take on its side story about sibling rivalry. What we saw was a gorgeously realized and touchingly reverential tribute to one of the greatest singers of all time.

In Mick Jackson’s 1992 screen version of “The Bodyguard,” starring Houston (in top form as the brilliant but difficult diva), Kevin Costner didn’t sing at all. In the stage musical, Gemmill didn’t do much singing, either—but, at least he was able to perform the production’s iconic theme song, “I Will Always Love You” (during a karaoke date with Rachel), albeit in its original “countrified” form.

Even with its inventive sets, crowd-pleasing ballads (“Run to You,” “I Have Nothing”) and dazzling production numbers, the theatergoing experience would’ve felt incomplete if Knight didn’t sing the enduring love song as imagined by Houston—which she did, before she led the company to its rousing “I Wanna Dance With Somebody” finale. Resisting the urge to dance and sing along was an exercise in futility!

You heard that right: “I Wanna Dance With Somebody” may not be in the original soundtrack of “The Bodyguard,” but the first single from Whitney’s second album (in 1987) is one of the exhilarating musical treats that makes the stage production memorably satisfying—as are Houston’s other monster hits, like “How Will I Know?,” “One Moment In Time,” “So Emotional,” “All The Man That I Need” and “I’m Your Baby Tonight.”

The stage version, which commences its UK tour in February, expanded the role of Rachel’s sister, frustrated singer Nicki, portrayed by Debbie Kurup, who seized the spotlight when she sang “Saving All My Love For You” and “All At Once” with torchy relish.

We grew up listening to those songs being rendered as contest pieces, but Knight, Kurup and company demonstrate that subtle singing is just as powerful as “birit” (belting) when it comes from the heart and soul.

We aren’t saying that the musical doesn’t have show-stoppers—after all, it’s inspired by the music and artistry of the foremost belter of her generation. (With “Mamma Mia,” you can disregard its disposably frothy story and just sing along with Abba’s timeless tunes.)

With “The Bodyguard,” you’ll have a hard time “ignoring” the heart-warming romance that blossoms between the Ice Queen and her distant protector—especially when Frank sees through the almost impenetrable facade that conceals the scared woman who wants to protect her 10-year-old son from the creepy stalker who keeps sending her threatening letters!

In her spectacular “Queen of the Night” opening number, Rachel is strapped in a harness as she descends on the lavish stage from the ceiling. But, away from the glare of the klieg lights, she’s just a scared mother in distress who needs some breathing space from the pressure and hazards of superstardom.

It may seem like she has everything any woman could ask for, but all Rachel wants is a special guy she can laugh and dance with—and to grow old with somebody who truly loves her!