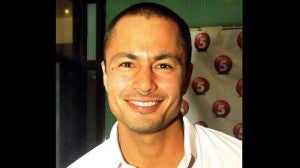 MANILA, Philippines—Actor Derek Ramsay apologized to his former girlfriend Angelica Panganiban after his estranged wife filed concubinage complaint against them.

“I would like to apologize to Angel, her family and all her fans for what’s happening right now. I assure you hindi ko sya papabayaan,” Ramsay posted on Twitter on Thursday.

Ramsay and Panganiban were a couple for six years before they broke up in 2012.

It was in 2011 when news broke out that Ramsay is married with a Filipino-Indian woman and they have an 11-year old son. But Ramsay only confirmed that he was a father this year.

Part of Jolly’s evidence to her complaint was an interview of Panganiban published in April 2013 that confirmed that they lived in together and she was aware of Ramsay’s marriage.

Panganiban remained mum on the issue but in her recent Instagram post that seemed to be a response to Jolly, she posted a photo of her with John Lloyd Cruz, her current boyfriend.

“This is us happy. God be with you,” the caption of the photo read.