After her ‘vocal malfunction,’ what Manila-bound Mariah Carey can do to save face | Inquirer Entertainment
Close
menu
search

After her ‘vocal malfunction,’ what Manila-bound Mariah Carey can do to save face 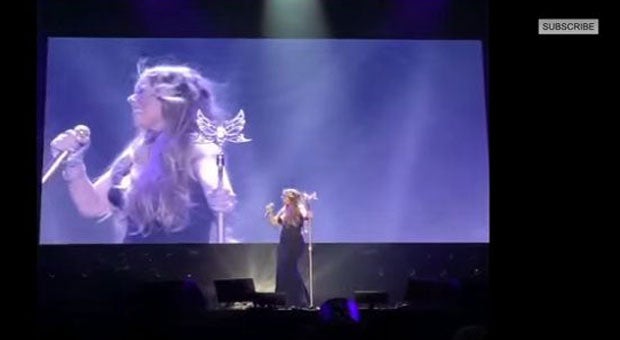 When rock stars and jazz legends crack their voices or flub their lyrics in concert, fans usually don’t mind; some critics may even see something beautiful in those moments of human frailty.

But when you’re somebody like Mariah Carey, described by the Guinness Book of World Records as a “songbird supreme” and having a five-octave vocal range, the slightest mistake in a live performance can be embarrassing and have a ripple effect.

On Saturday, news website thatgrapejuice.net was the first to post videos taken from Carey’s concert in Tokyo, held on the same night, which opened her “Elusive Chanteuse” two-leg Asia/Oceania tour, showing the pop diva’s “vocal malfunction”—euphemism for being out of tune—on at least two songs, “Vision of Love” and “My All.”

More news websites have followed suit. On Monday, musicfeeds.com.au posted more videos, with an accompanying story titled, “Mariah Carey struggling vocally ahead of Australian tour.” It reads: “A longer clip captures Carey’s shaky vocals throughout ‘Always Be My Baby,’ making us mere mortals feel a lot better about our amateur singing skills. Yet another

Another site, franchiseherald.com (“Mariah Carey messes up in Tokyo kick-off performance of Elusive Chanteusse world tour; blasts Nick Cannon in one of the songs”), said: “Many articles associated her dismal performance as reflective of her marriage troubles with Nick Cannon. But there’s one bonus track in the said Tokyo show that was very noticeable and got properly documented. She indirectly blasted her soon-to-be-ex-husband when she added words to the original lyrics of the Billie Holiday classic song, ‘Don’t Explain.’

“The song goes like this: ‘Cry to hear folks chatter / And I know you cheat / Right or wrong, don’t matter / When you’re with me, sweet.’ What’s the extra lyrics? “I know you cheated motherf***er.”

The whole fiasco is now on YouTube, with a music channel, Celebrity, posting a one-minute edit of at least four Carey foul-ups during her Tokyo gig—the most humiliating clip showing her slumping down on a sofa after failing to hit the right notes. It has currently garnered over 65,000 views.

British news site dailymail.co.uk’s story, “‘She can’t sing anymore… at all!’ Mariah Carey’s vocals mocked by fans as she kicks off Elusive Chanteuse tour in Tokyo,” quoted some of her own fans’ comments:

“One Twitter user, Elle, wrote: ‘It’s a wrap for Mariah Carey’s singing career. You’re a legend. Time to retire. She can’t sing anymore. At all. What happened?’

“A (Twitter) user, who goes by handle Peaches & Herb, tweeted after seeing the video: ‘Y’all. Mariah Carey really can’t sing anymore. That was hard to listen to.

“She added: ‘Mariah Carey should’ve bowed out right when her voice was giving out. Save herself the embarrassment.’

“‘I knew it was something wrong with MC though. No artist lip syncs at every show.’”

The most biting yet insightful criticism came from thatgrapenews.net itself, suggesting that Carey can “play around with the arrangement” and tweak the songs’ key to suit her “new” vocals. And if lip-synching, don’t do so to the CD versions of tracks from 1998. It’s embarrassing…”

But while the site’s writer added that there may still be hope for an icon like Carey, “yet, if she’s ever to become commercially relevant again… she needs to sort out her problems pronto.”

The 20-date “Elusive Chanteuse” tour proceeds to South Korea tomorrow, and then to China, Malaysia, Singapore and Taiwan before hitting the Philippines on Oct. 28 at the SM Mall of Asia (MOA) Arena.

Tickets to the MOA Arena show are priced from P15,840 (Patron A) to P1,960 (General Admission), although select Patron seats go for as high as P25,845—according to a source who had been wanting to buy directly from the concert promoter.

Mariah Carey is coming back to Manila