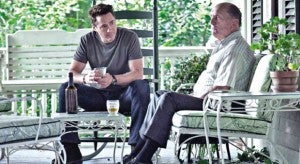 TWO RIVETING Roberts—Duvall (right) and Downey Jr.—play father and son in “The Judge.”

LOS ANGELES—“Pagsanjan,” we replied when Robert Duvall asked, “What was the town we filmed (‘Apocalypse Now’) in?” We asked the Oscar- and Golden Globe-winning actor about his experience shooting “Apocalypse Now” in the Philippines since the recent Telluride Film Festival in Colorado celebrated the 35th anniversary of Francis Ford Coppola’s war epic with a special panel discussion.

The panel included some of the film’s key behind-the-camera talents: Coppola, cinematographer Vittorio Storaro, producer Fred Roos, writer John Milius and editor Walter Murch. “They never invited the actors, did they?” asked Duvall, dressed in a black suit and white shirt. “None. I never even heard about it until recently.”

“Pagsanjan was very nice,” he said, and began sharing his memories of shooting the Vietnam War classic in which he won a Golden Globe Best Supporting Actor trophy. As Lieutenant Colonel Bill Kilgore, Robert delivered one of cinema’s classic lines: “I love the smell of napalm in the morning… smells like victory.”

“The people took us into their homes,” said the actor, once hailed by The New York Times as “the American Laurence Olivier.” He smiled, his eyes beaming at the recollection: “We stayed with them, which was wonderful. They made us wonderful huts to live in during the day. They are very cordial, nice and hospitable people.”

The 1984 Oscar Best Actor winner for “Tender Mercies” (he also earned an Academy Best Supporting Actor nod for “Apocalypse Now”) remembered one particular incident. “A man came up to me,” he said. “It was like a time warp out there. There was one Catholic priest and most of the people were somewhat isolated. They would go, ‘Hey, Joe!’ like in World War II.”

Eyes twinkling, the actor continued, “There was this nice, young man… he said, ‘Mr. Hackman, I like all your movies, especially “The French Connection.”’ I said, ‘No, I’m Robert Duvall.’ 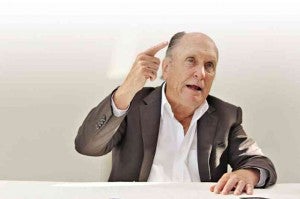 DUVALL met a Filipino fan who mistook him for Gene Hackman. photo by RUBEN NEPALES

He said, ‘Oh, you’re my favorite actor.’ We were really out there [in the jungle] but it was nice.”

Added the man, sprightly at 83, “We went fishing. We had the local ice cream. The popular sport was basketball and the people weren’t that tall. We had games. It was a nice experience to be there with the people, in the middle of nowhere.”

On his costar Marlon Brando (Colonel Walter E. Kurtz), Duvall said, “I didn’t work with him directly. He came to the jungle in his baby blue Mercedes. He had his hearing aid and his lines were fed to him. He loved to eat. He would eat all the food.”

Duvall stressed, “But he was a very unique actor.” He first met Brando in the 1960s. “It was interesting because it was on the movie, ‘The Chase’ (1966). He brought me into the dressing room to talk about the film. I was nervous because we always looked up to Brando. We talked. He said, ‘What do you think about this script?’ I said, ‘Pretty good.’ He said, ‘It seems pretty s****y to me.’ It was a nice talk.

He added about the late legendary thespian: “As up-and-coming actors, we all respected Brando. He always used to watch ‘Candid Camera’ to observe ‘real’ behavior. That’s what he was.”

In his new film, David Dobkin’s drama “The Judge,” Duvall and another Robert—Downey, Jr.— give standout performances as estranged father and son. Duvall has the title role, a town

ROBERT Duvall, as Colonel Bill Kilgore in “Apocalypse Now,” which was shot in the Philippines, delivered one of cinema’s most memorable lines: “I love the smell of napalm in the morning.”

judge who is suspected of killing a murderer he had sentenced. Duvall’s judge does not remember what exactly happened.

Duvall and Downey, as a rich Chicago lawyer who comes home because his mother passed away, often spar and set off the dramatic fireworks in the film. The two talented Roberts are moving in a scene which reveals the real reason for the patriarch’s confusion.

In a separate interview, we asked director Dobkin, who cowrote “The Judge” based on his relationship with his late mother, about shooting this crucial scene that we won’t explain in detail for the filmgoers’ benefit. The two actors shine in this scene that exposes their characters’ vulnerability.

“First of all, I had a personal experience very similar to that,” Dobkin recounted. “That was the seed experience that created the movie. Being in such a situation, not knowing what to do and how to get through it was one of the most challenging experiences of my life. It is a scene that, for a good reason, actors are worried about. That was the reason Duvall was not going to do the movie at one point.”

Dobkin continued: “I flew in and sat down with Duvall. I explained my personal experience with it. I think that convinced him that I was going to do it the right way. We discussed the scene a few times. I said it would be shot in a couple of hours. It’s going to be done very much in real time, with three cameras.”

The filmmaker explained, “I built that little bathroom just so we could shoot the scene very quickly. It was the scene everyone was most afraid of doing. On that day, Duvall asked me a couple of times, ‘Well, do I have to get naked in the shower or not?’ My response was—wanting to be honest—‘I don’t know until I’m shooting… if I’m going to need that or not.’

“On the day, I remember Duvall came to me and right before we started shooting, he came up the stairs and said, ‘If you need me naked, I’ll do it.’ The thing that was amazing at that moment was that I realized he was ready to be that vulnerable.

“I said, ‘I don’t think we need to do that, but I thank you for showing up like that.’ It was a closed set. Duvall and Downey just really went through it. By the way, Downey was really shocked. He was not sure what to do in that scene. That was great acting. A lot of people would put too much effort, overact or work really hard knowing it’s such a dramatic scene.”

Duvall admitted with a grin that he did not recognize Downey when the latter once approached him in a restaurant. “I was sitting there preoccupied,” admitted Duvall, whose wife, Luciana Pedraza, was the one who told him that it was Downey. “People look different than they do on film. I had met him before but my mind was elsewhere.”

“He’s a great guy,” Duvall said of Downey who also produced “The Judge” with his wife, Susan Downey. “He’s very offhand, relaxed and democratic. It was great to work with both of them.” 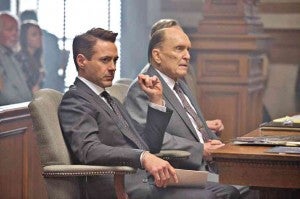 Obviously, Duvall isn’t slowing down in his 80s. He announced that he just finished directing a movie, “Wild Horses.”

“It’s a movie that I took over from a guy,” Duvall said. “We worked on it. I left two things about a man with a ranch who has a gay son. He kicks his son off the ranch. Fifteen years later, when things change and he realizes he’s in error, he brings his son back for the reading of the will. There’s a crime that’s been committed. A female Texas Ranger is assigned to find a missing body. My wife plays the Texas Ranger. My wife studied Brazilian jiu-jitsu for a year and now, she has a blue belt.

Duvall disclosed his film’s other actors. “Fortunately, we got Adriana Barraza to play in our movie. She’s a wonderful actress. We were fortunate to have her on a very low budget. We had James Franco, Josh Hartnett and some wonderful first-time actors.”

Of directing Luciana, Duvall chuckled as he quipped, “I can’t direct my wife.” Duvall, who also wrote the film, laughingly said that in one scene, Luciana “threw out” what he penned and delivered something from her own life.

“My wife keeps me alert,” he lovingly said of Luciana. He is 41 years her senior. She is the granddaughter of an iconic Argentinean aviator. “You have to hang out with younger people,” he revealed his secret for staying alert and active. “Try to stay focused, and if you do a project, you really have to be alert.”

As to how he wants to depart this world, Duvall said, “Around friends with love. Just a few people—loved ones. Cremate my remains. For my ashes to be near my wife—that would be the best. To be with loved ones, yeah, because there’s an old saying, ‘Gone but not forgotten.’ That’s diminishing, too, because sometimes, you are forgotten.”