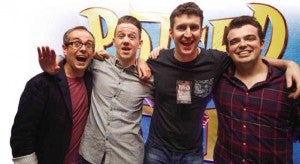 Never mind that it was a weekday, a good-size crowd of young fans, parents in tow, trooped to RCBC Plaza’s Carlos P. Romulo Theater on Tuesday for opening night of the third Manila season of “Potted Potter.” The rip-roaringly wacky two-man stage act spoofs the “Harry Potter” series, condensing seven books into 70 minutes.

Not a few kids came in Hogwarts school uniforms—grey sweaters, ties, slacks or skirts under robes that bore house emblems.

Others were more creative: A fan was outfitted as the frizzy-haired witch Bellatrix Lestrange; another lugged an improvised frame 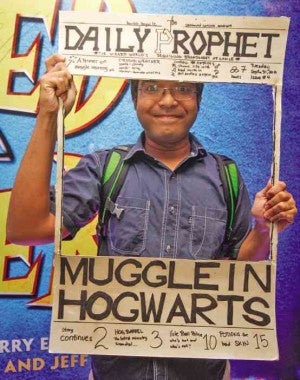 of the “wizarding newpaper” Daily Prophet, which he held to his face.

“This is my first time to watch the show,” said Gab, garbed as a Slytherin student. He would later assume the role of Seeker in “Potted Potter’s” hilarious version of Quidditch, which looked more like a beach volleyball match in which—much to the delight of actors Benjamin Stratton and James Percy—no one scored.

Clearly, the event wasn’t just for kids. Gretchen and Cayo said they bought their costumes and props from various Harry Potter merchandise stores here and abroad.

The creators, two-time Olivier Award-nominated actors Daniel Clarkson and Jefferson Turner, mingled with the fans and autographed posters. After the show, it was Ben and James’ turn, making themselves available for photo ops. They handed out certificates and boxes of chocolates to those who took the time and effort to come in costumes. 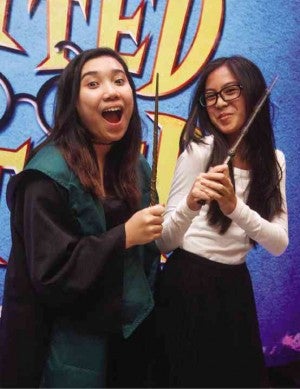 Amid the frenzy, we got to ask Dan and Jeff a few questions. They didn’t usually interact with the crowd before or after the shows, they said. “[But] it’s always fun to see everyone dressed up,” Dan told the Inquirer. “They wore better costumes than we have in the show!”

Jeff said, “I like to dress up all the time; that’s one of the reasons I became an actor. We wrote the show because we wanted to pretend we’re wizards. It’s Halloween every day in our lives.”

He would have gone as his favorite character, Mr. (Arthur) Weasley, that night, Jeff said. And Dan? “Gandalf,” he deadpanned, making Jeff chuckle. “My favorite Harry Potter character is Gandalf.”