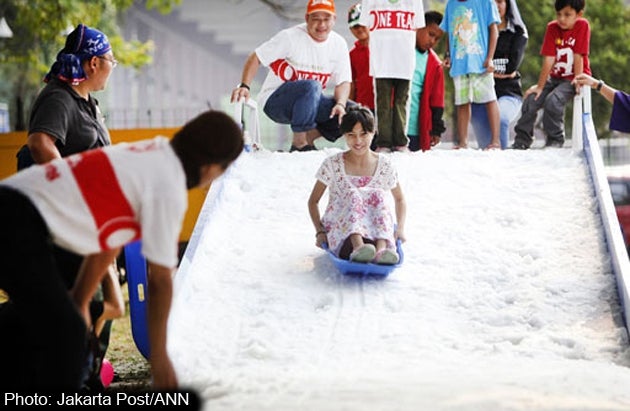 A girl plays in artificial snow at the Jak-Japan Matsuri event in Jakarta on Sunday. Jakarta Post/ANN

JAKARTA—As most Indonesian children, especially those in urban centers like Jakarta, are exposed from a young age to manga (Japanese comic books) and anime (Japanese animation), J-Pop (Japanese pop culture) has established a loyal following that not even the recent invasion of K-Pop (Korean pop culture) can rival.

On Sunday, more than 45,000 J-Pop enthusiasts packed the Parkir Timur Senayan arena in South Jakarta to take part in the last day of the Jak-Japan Matsuri festival organised by the Japanese Embassy in Jakarta.

Hundreds of young visitors, most of whom belong to Japanese-culture communities, engaged in cosplay (costume play), which has become the norm for Japanese-themed events in Jakarta.

Various characters from manga and popular games, including Rurouni Kenshin, Naruto, Pokemon and Shingeki no Kyojin, came to life in the playful display of costumes. A number of young girls even donned yukata (Japanese traditional dress), or appeared with Lolita or Harajuku likenesses.

“I have a yukata, so why not dress up while I can? Wearing regular clothes would be boring,” said Stephanie, who donned a yukata and Geisha-style outfit for the event.

Various games and food booths, as well as traditional and modern art performances, including by local artists J-Rock and JKT48, also enlivened the festival.

A new feature of the annual festival was a snow-blowing machine, which was among the event’s most-anticipated attractions.

“Most Indonesians have never experienced snow before, so we wanted to give them the experience,” Japanese embassy press attaché Ayako Masuda told The Jakarta Post.

“This is a must-attend event every year for us. Last year, our community even performed onstage,” he said.

A Kopaja member and a devout J-Pop enthusiast, Cindy Carolina, said that J-Pop culture had yet to lose its appeal, despite the growing popularity of K-Pop.

“I have loved manga and anime for years, so it has become my hobby. I know K-Pop is very popular nowadays, but I still prefer J-Pop because of the manga and anime,” Cindy said.

Isfina, a civil servant at a go-vernment ministry, shared the sentiment.

“I grew fond of Japanese culture because of manga and anime that I read when I was younger. I also admire Japanese passion and determination,” she said, adding that the Internet had helped cultivate her interest in J-Pop.

Theater chain Blitzmegaplex recently screened a host of Japanese movies that were based on manga-stories, including Detective Conan and Rurouni Kenshin. The highly-anticipated Stand By Me Doraemon, meanwhile, is slated for a December release.

“Japanese pop culture is unique in a way because fans can also participate, such as when they engage in cosplay, which makes them happy. We are very happy to know that Indonesian people are enthusiastic about Japanese culture,” Masuda said. “It will bring the [two] peoples closer.” According to Masuda, the number of Indonesians studying Japanese had also increased.