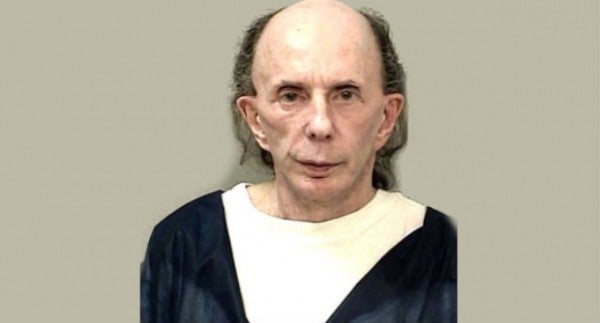 In this Oct. 28, 2013 photo provided by the California Department of Corrections and Rehabilitation, shows former music producer Phil Spector at the Health Care Facility in Stockton, Calif. Two newly released photos of Spector show the toll of age and prison on the once flamboyant music legend. California Department of Corrections spokeswoman Terry Thornton said Tuesday, Sept. 23, 2014, the October 2013 photo was taken when Spector was moved to the prison system’s huge California Heath Care Facility in Stockton. He is serving 19 years to life for the 2003 killing of actress Lana Clarkson. AP

LOS ANGELES — Two newly released photos of Phil Spector show the toll of age and prison on the once flamboyant music legend.

The most recent photo shows a bald, somber-looking 73-year-old Spector staring straight into the camera on Oct. 28, 2013. An earlier photo of a smiling Spector is dated July 24, 2013.

California Department of Corrections spokeswoman Terry Thornton said Tuesday that the October photo was taken when Spector was moved to the prison system’s huge California Heath Care Facility in Stockton. The facility provides medical and mental health care to the state’s sickest inmates, including those with chronic conditions.

Thornton said she couldn’t reveal details of Spector’s health because of state medical privacy regulations. He is serving 19 years to life for the 2003 killing of actress Lana Clarkson.

The legendary music producer revolutionized rock music with his “Wall of Sound” before his genius was eclipsed by decades of bizarre behavior that culminated in his conviction for murder. He claimed he was innocent and his defense team argued that Clarkson, despondent over a fading acting career, killed herself at his castle-like home.

His appearance in bizarre wigs at his trials and testimony about violent behavior tarnished his reputation as a musical genius who created the “Wall of Sound” that merged beautiful vocal harmonies with lavish orchestral arrangements to produce such pop hits as “Da Doo Ron Ron,” ”Be My Baby” and “He’s a Rebel.” His production of the Righteous Brothers’ version of “You’ve Lost that Loving Feeling” remains a classic.

His first jury deadlocked, but a second one found him guilty of second-degree murder in 2009 six years after Clarkson’s death. By then, he had married his much-younger wife, Rachelle, who was at his side throughout the trials and continues to live at the mansion and visits him in prison.

Helen Mirren gets star on Hollywood Walk of Fame