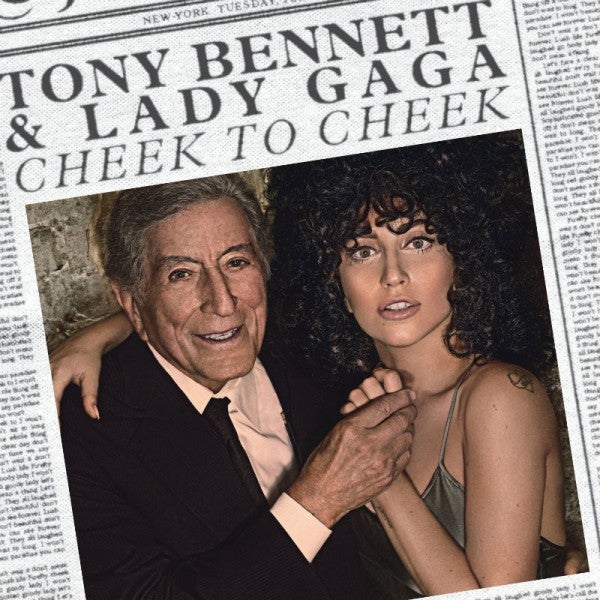 Tony Bennett has never forgotten the boost he got when Frank Sinatra declared him “the best singer in the whole business.” Now it’s Bennett’s turn to grant his imprimatur to another Italian-American singer from New York: Stefani Germanotta, better known as Lady Gaga.

Bennett and Gaga first teamed up on his Grammy-winning 2011 “Duets II” CD to perform the standard “The Lady Is a Tramp,” with Gaga displaying impressive vocal chops. It turns out that this seemingly odd couple — separated in age by 60 years — both share a passion for the Great American Songbook and jazz singing, which Gaga says she first took up as a teenager.

That led them to record “Cheek to Cheek” — only the second full album that Bennett has done with another singer in his nearly 70-year recording career. The first was the sublime 2002 album, “A Wonderful World,” with k.d. lang, on which the two voices blended smoothly on a subdued collection of ballads associated with Louis Armstrong.

There’s a completely different chemistry on “Cheek to Cheek,” starting with the opening track, Cole Porter’s “Anything Goes,” with the duo trading lines in a bright, brassy big-band swing arrangement. A sassy Gaga enthusiastically belts out her lines, while Bennett is as always elegant and precise in his phrasing.

Irving Berlin’s “Cheek to Cheek” and Duke Ellington’s “It Don’t Mean a Thing (If It Ain’t Got That Swing)” are both briskly paced with Gaga’s high register vocals spinning around Bennett’s middle-range lines with the two engaging in some crisp harmonizing and occasional scatting. On the Nat King Cole hit “Nature Boy,” Gaga shows a different side, breathily caressing the lyrics and softly blending her lines with Bennett’s, backed by a lush orchestral arrangement and the late Paul Horn’s airy flute solo.

This is a liberating album for Gaga who shows that she doesn’t need the outlandish meat dresses, voice-altering electric effects and elaborate stage shows to make an impact because her voice stands out on its own. Had she been born in an earlier era, Gaga would have been right at home in an MGM musical. On her solo features, Gaga sings softly and with restraint on Porter’s ballad “Ev’ry Time We Say Goodbye,” and shows her vulnerability in an emotional rendition of Billy Strayhorn’s “Lush Life,” clearly identifying with the song’s theme of loss and heartache.

The only surprise with Bennett is how vibrant he sounds at 88 with a voice that though raspier than in his early years has matured gracefully like fine wine, taking on more emotional depth, as reflected in his solo numbers, “Don’t Wait Too Long” and Ellington’s “Sophisticated Lady.”

Bennett brings out another side of Gaga’s artistry by recording this album in his customary manner — with the main performers interacting in the studio. The arrangements feature his touring jazz combo with pianist Mike Renzi plus such top-notch guest soloists as tenor saxophonist Joe Lovano and trumpeter Brian Newman.

At times, Gaga’s jazz phrasing can sound forced, as on Jerome Kern’s “I Won’t Dance,” and she sometimes belts out the lyrics like a pop star. Gaga, who says she intends to record more jazz albums, has great potential as a jazz singer and could learn much from Bennett who early in his career often sang in a stiff operatic voice before becoming more relaxed, nuanced and jazzier once he started recording albums of the timeless standards.

Read Next
Caught on cam: 2 TV newshens in tug of war over Deniece Cornejo
EDITORS' PICK
PH importing sugar after all: Marcos okays 150,000 MT
Supply of white onions gone since July, growers say
Bakers’ turn: P4 hike on bread prices sought
What to watch out for when selecting a video surveillance solution
vivo brings to the Philippines a powerful smartphone with a slimmer body, the vivo Y02s for only PHP 6,499
House energy committee chair Arroyo bats for cheap electricity
MOST READ
LOOK: Miel Pangilinan dazzles in glittery pre-debut shoot
DepEd to give teachers P5K cash allowance within first week of classes
Suspect in rape-slay of teenaged biker arrested in Camarines Sur
Mayor bares issues vs closed QC school
Don't miss out on the latest news and information.