(Editor’s note: Our columnist, the original Kim in the Claude Michel Schönberg and Alain Boublil musical “Miss Saigon,” performed in the 25th anniversary gala this week. She shares her journal with Inquirer Entertainment readers.) 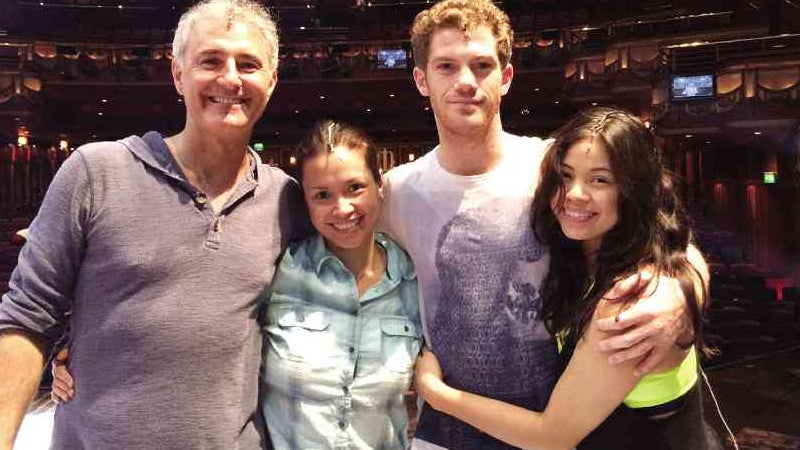 CHRISES and Kims, then and now: (From left) Simon Bowman, the author, Alistair Brammer and Eva Noblezada

LONDON—It was the family reunion to end all family reunions. Members of generations past, both distant and recent, plus those of the present, came together, sharing different stories that were somehow the same.

Over the last few days, members of the original and current “Miss Saigon” companies (plus many more alumni of the show during its 10-year-and-1-month history at Theatre Royal Drury Lane) had gathered to rehearse for a special gala to mark the show’s 25th anniversary. It was performed on Monday, Sept. 22.

My first rehearsals on Thursday last week were isolated, with only a few cast members called in. (As I write, I am not at liberty to say what we’ll be doing; it will be a surprise for the audience).

But I think it’s safe to say I rehearsed with Simon Bowman, my original Chris. We sang together for the first time in so many years. And, well… let’s just say absolutely nothing has changed despite the passage of time. (Can we say, chemistry?)

My next call was on Friday with members of the current, alumni and original cast. The lobby became our de facto hub for all the hugging, kissing, tears and many selfies that came with people not having seen each other for years. 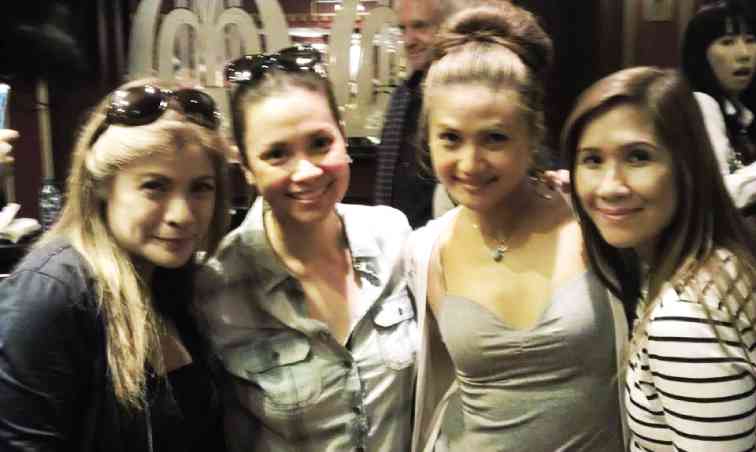 Company members that I never got to meet until now felt like family, too, much like meeting for the first time relatives from far, far away. Hardly any handshakes were exchanged but there was an overflow of embraces, plus lots and lots of screaming.

The jet lag is going to be murder. My body has no idea where it is. I know because, for some reason, I’m keeping more “normal human being” waking hours compared to the “Elvira, Mistress of the Night” kind I customarily keep.

That said, this is going to be one very exciting week. 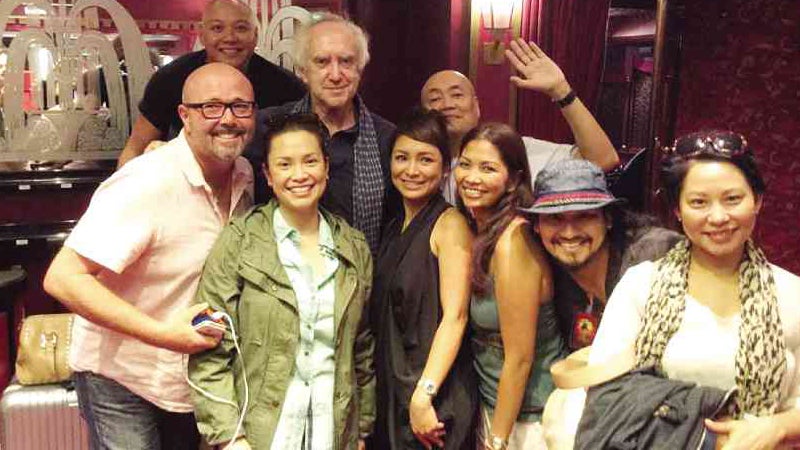 It was quite a long drive from London Heathrow Airport to Covent Garden, which is where we’ve been billeted by the office of Cameron Mackintosh (producer of “Miss Saigon,” “Les Misérables” and “The Phantom of the Opera”).

Two gents from his staff, Trevor Jackson and Matthew Eastaugh, met us at the hotel to make sure we were OK.

All venues for rehearsals and that of the gala performance are within walking distance from our hotel, so Matthew took our little group on an impromptu walking tour around Soho and all the places we’ll need to be. First stop was the most obvious: Prince Edward Theatre, where “Miss Saigon” is currently running. We bumped into a couple of cast members as they headed to work.

Next was Dominion Theatre—or, at least, Matthew points it to us from Charing Cross Road. My first rehearsal would be at its brand-new rehearsal studio, so we had to know how to get there. Finally, we stopped at Prince of Wales Theatre, home of “The Book of Mormon,” because we would be watching this show during our brief stay. Then we headed home; the jet lag was starting to hammer us on the head. 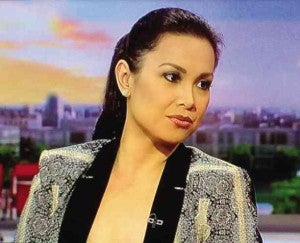 Thankfully, there was no work, which gave us (my husband Rob Chien, assistant Sheilla Habab and myself) time to get some sleep.

Scheduled for Eva Noblezada (“Miss Saigon’s” current Kim) and myself at Prince Edward’s Amadeus Room was an interview for the Delfont Mackintosh Theatres’ (DMT) program books (distributed at all DMT theaters in the West End).

Before that, I was greeted in the theater lobby by Jon Jon Briones, who currently plays The Engineer. The hugs and screams started. Jon Jon and “Miss Saigon” company manager Katy escorted me into the house, where the company was having a vocal call with musical director Alfonso Casado Trigo.

I was then introduced to the company, which included Pinoy actors Chuck Marbella, Arnel Reonal, Romeo Salazar, Julia Abueva and Ela Lisondra. Tanya Manalang, alternate Kim, was not in the building. I also met Kwang-Ho Hong, current Thuy, a huge pop star in his native South Korea. He covered the role of Chris in the Korean production.

Finally, I got to meet Eva, a very bubbly and ebullient 18-year-old, obviously very excited to be in London. Our interviewer, Matt Wolf, a native New Yorker, had just interviewed her for Broadway.com. He recorded our interview on an old-fashioned cassette recorder. So nostalgic!

After the interview, we headed back to our hotel. We were catching a train to Salford at Euston. Tomorrow morning, we were appearing on “BBC Breakfast” to talk about the current production and Monday’s gala. We were accompanied on the two-hour train ride by Simon Raw, “Miss Saigon” publicity person, and Linda, resident makeup and hair person. Sigh.

The “BBC Breakfast” interview went very well, indeed, and we got an extra two minutes. We checked out of our Salford hotel and returned to London.

Rob and I decided to do a little exploration of an old stomping ground, Covent Garden. We first hit the Apple store, as we always make a pilgrimage no matter where we are… and the Covent Garden store is one of my favorites. The brand-new iPhone 6 hasn’t appeared but already we spied a few campers outside, waiting for the day of its formal launch, Sept. 19. 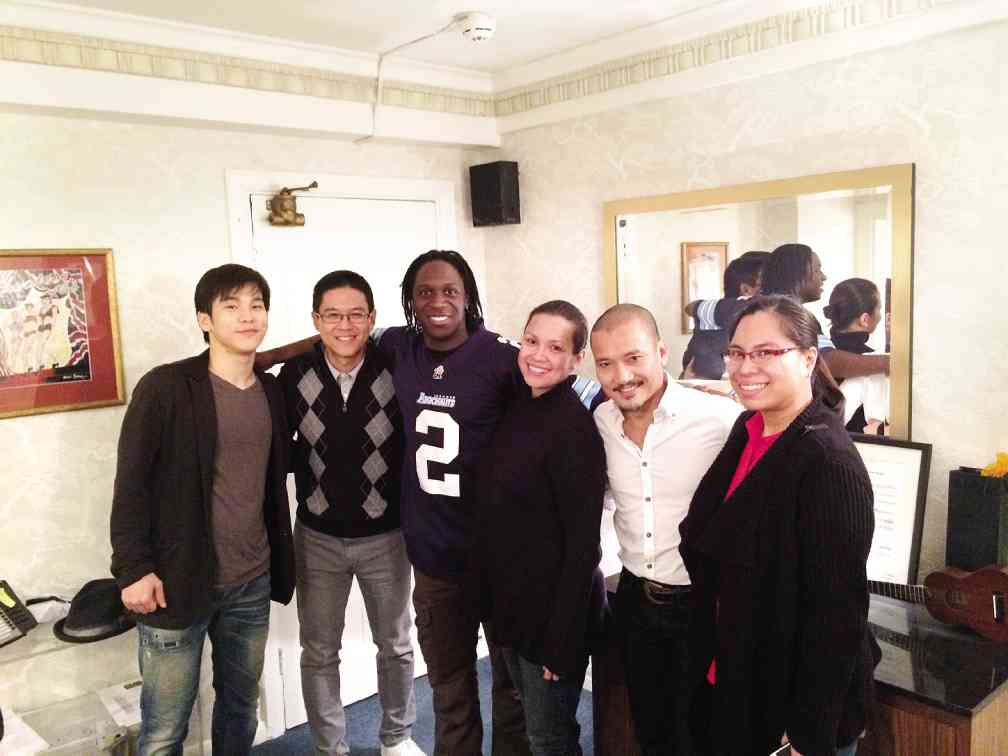 We had tea at Laduree, famous for scrumptious macarons. Then we headed to my old workplace, Theatre Royal Drury Lane. “Charlie and the Chocolate Factory” is currently playing… it was funny seeing another show’s marquee up there.

At the Stage Door, we visited Jill Hudson, stage-door keeper. My mom would have long chats with her nightly when she picked me up after the show. It was wonderful catching up with her. No, she hadn’t seen the new production. I told her it would be worth it because of Jon Jon.

First rehearsal day at Dominion Theatre, where “Evita” is currently playing. Matthew was standing in front of the theater when we arrived. The rehearsal studio is gorgeous, well-lit and spacious.

Rachelle Ann Go was already there, along with Alfonso and Bob Avian (choreographer). Rachelle Anne and I are slated to sing together (I can’t write about it at this point) as part of the gala performance. We rehearsed together vocally and then Bob placed us in the space for a little staging (nothing fancy).

We sang a few more times before the rehearsal continued with Simon (original Chris), Eva and Alistair Brammer (current Chris). As I said, Simon and I… well, nothing much had changed in the “chemistry” department. Whew! Did it just get a little hot in here?

Laurence Connor (director) and John Rigby (musical supervisor) turned up looking exhausted, having just arrived from New York City. (Thank goodness for the Starbucks down the street.) Rehearsal then continued with all personnel.

Claude-Michel Schönberg also made an appearance, checking on a piece of music he had arranged for us to sing. He pronounced it boring and asked us to sing it as it’s written in the existing score. Rehearsals ended around 12:30 p.m.

On this night, we were to see the new production for the first time! I was extremely excited.

I truly enjoyed the show and, I have to say, I was most proud of Jon Jon as The Engineer. From his beginnings in this show as part of the ensemble of the original company in 1989 to West End leading man now, he has, indeed, come full circle.

I was up on my feet cheering for him like crazy and then screamed like a banshee at his curtain call. It was a perfect portrayal with not one wasted moment. It was obvious that he had crafted a performance after having thought every single second through.

The night ended with us paying Eva and Jon Jon visits in their dressing rooms, with other members of the cast coming to where we were to say hi.

Hugh Maynard (John) was camping out for the iPhone 6, so he didn’t stay forever. Kwang-Ho (Thuy) came by, as well, and… I guess his K-Pop charm had so bowled us over on stage, we squealed like teenagers once we saw him in person. He was gracious and very kind. His fans will be happy to know that he’s an incredibly humble and sweet guy.

We walked back to the hotel with the music still ringing in our ears. I was giddy, knowing that, on the following day, we’d be getting up on that very same stage along with friends that we haven’t seen in years, singing the very music from this show that changed our lives forever.