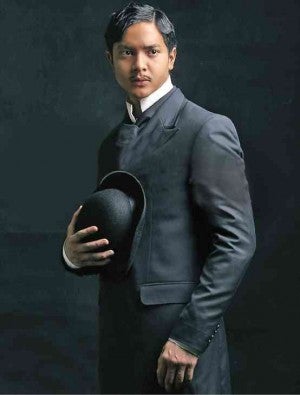 It was difficult to imagine the mestizo actor in the role because of his fair skin, but he whipped out his phone and showed the Inquirer an unreleased photo of himself in full “darkening” makeup and costume.

“Ilustrado,” he said, is the network’s first bayaniserye and will air nightly in October. “It’s also a movieserye. We use film equipment and shoot in HD. ‘Ilustrado’ is about Rizal’s love for his mom, Teodora Alonso (Eula Valdez), for Leonor Rivera (Kylie Padilla) and for the country.”

Alden, 22, is here for the “Bet ng Bayan” provincial showdown. The talent tilt will be on TV, a show he will cohost with singer Regine Velasquez.

“It’s a nationwide reality talent search… different from other talent shows because we bring the venue to those who cannot go to Manila to audition,” he said.

The actor admitted that he took the cohosting gig because he does not have a regular show at the moment: “I asked GMA for this. I told them, while I’m able, please keep me working.”

Alden, whose real name is Richard Faulkerson, feels “blessed” that the network trusted him with these big projects. “It started with ‘Carmela,’ with Marian (Rivera),” he recounted. “And I enjoy hosting segments in (the variety show) ‘Sunday All Stars.’ Before I became an actor, I hosted a school pageant. So maybe [the execs] said, why not give him a project that involves hosting. I also enjoy the perks; I’m going white-water rafting later. I just deliver lines [in different places] but it’s so rewarding.” But, made to choose between hosting and acting, Alden added, “I’d still choose acting.”

Three years and eight months into the business, Alden said, he still pinches himself sometimes, incredulous about the quick ascent of his career.

“It’s gone really fast, thanks to GMA and my supporters,” he said, gushing. “I’ve learned to stay humble and true to myself. That’s how people started liking me, and it keeps me grounded.”

He is aware that it’s a mindset not shared by some new actors. “I won’t name names, but there are newbies who let a little taste of success go to their heads.”

As for why he’s currently single, Alden explained, “I’m not looking for love right now. I have other priorities. It’s very cliché, but that’s the truth.”