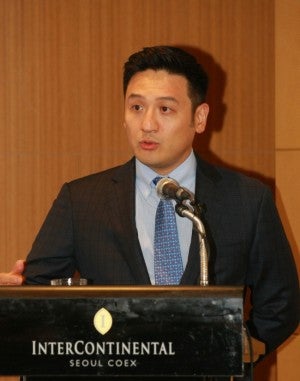 SEOUL—Korean TV dramas have been popular across Asia for the past decade, with series like “Autumn in My Heart,” “Jewel in the Palace” and the most recent “My Love from the Star” all being major hits. Now, Korean dramas are paving the way across the US, triggered by new platforms such as on-demand Internet streaming media.

“People in the US are gripped by Korean dramas because they are very different from typical American dramas,” said Suk Park, cofounder and co-CEO of DramaFever, a New York-based company that streams international movies and dramas online.

There is a unique flavor to the Korean drama, Park said during a group interview with The Korea Herald and other local media at a hotel in Seoul earlier this month. He was in Seoul to participate in Broadcast Worldwide 2014, the largest international broadcasting fair in Asia, held from September 3-5.

“Unlike American dramas that are replete with violence and sexual content, Korean dramas are usually romantic comedies with a simple plot,” said Park, adding that US viewers who are tired of provocative and smutty content now seek out Korean dramas.

“If the Korean drama follows its American counterpart and loses its color, it will never have its niche market or become successful in the US,” said the founder of the largest website for international televised content, focusing mostly on Korean dramas and some Spanish telenovelas.

It was not too long ago when the Korean-American jumped into the Korean drama business, founding DramaFever with his friend Seung Bak in 2009.

Born in Korea, raised in Spain and educated in the US, Park stumbled on the business idea when he was travelling throughout Asia for a previous job managing the international division of a media company.

“I would come back to my hotel room from meetings and turn on the TV in cities (and countries) like Taiwan, Singapore, Shanghai and Manila.

“Korean dramas were screened all the time in these cities, and I was very happy to see this trend,” Park said with a smile. “But I suddenly started to wonder why this was not the case in the US.”

Soon after he returned to New York, he started researching the market, only to find out that there were already dozens of websites catering to Korean drama fans online. However, all of the websites were pirate sites streaming illegally.

He said he saw a possibility in the market as many young Americans are growing up in a multiethnic environment and want to learn about the world.

“But people thought I was crazy to think that making money out of content that is offered for free and illegally was even a possibility,” he said.

In spite of wide concerns, Park implemented a vision to launch a mainstream website that legally delivers international content with subtitles for US viewers, while being able to earn a share for the directors and actors who worked hard to produce it.

He believes that US viewers–who are often unwilling to try new things–can employ understanding and appreciation for relatively unfamiliar Asian culture through watching dramas featuring different food, people and music.

DramaFever has over 13,000 episodes online with quality-controlled subtitles both in English and Spanish.

He added that surprisingly the number of subscribed viewers who pay for the shows is increasing every month. “And more interestingly, about 80 per cent of our visitors – 3.5 million unique visitors each month and 20 million total visitors – are non-Asian.”

Even with such success, Park says, it is better to be lucky than smart.

“I was in the right place at the right time, as the on-demand streaming market is growing and the cost to deliver content online is decreasing,” he said. “I hope to see many more Korean dramas become popular in the US and all around the world.”