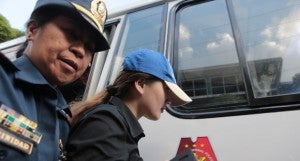 MANILA, Philippines—Model Deniece Cornejo still has to spend another night in jail while her two co-accused Cedric Lee and Zimmer Raz are now enjoying their temporary freedom.

Lawyer Ferdinand Topacio, Cornejo’s counsel in the serious illegal detention case filed against her by actor-host Vhong Navarro, told reporters in Camp Crame that the Taguig Prosecutor’s Office failed to ‎sign the model’s release order from the court.

‎Cornejo, 22, is currently detained at the anti-transnational crime unit detention cell of the Criminal Investigation and Detection Group (CIDG).

Topacio said City Prosecutor Archimedes Manabat, who is apparently the only person authorized to sign the release, was not in his office to attend a Maguindanao massacre trial.

“(But) all her bags are packed and she’s ready to go,” Topacio said when asked about the current state of his client.

Her grandfather Rod Cornejo said in an interview outside her cell that ‎Cornejo “did not take it very hard.” ‎‎

Cornejo, along with businessman Cedric Lee, Zimmer Raz and several others, has been charged with serious illegal detention, a non-bailable offense in connection with the Jan. 22 alleged mauling of Navarro in the rented condominium unit of Cornejo in Taguig City.

The arrest warrants for Cornejo and the two were issued last April 21. Lee and Palma were arrested on April 26 in Eastern Samar‎. Cornejo surrendered to the Philippine National Police (PNP) chief Director General Alan Purisima on May 5.

Topacio, Cornejo’s lawyer for the serious illegal detention case, admitted that the model’s camp had difficulty raising half a million pesos to be able to post bail.

But on Tuesday afternoon, Topacio said the Cornejo’s family  were able to come up with the P500,000 bail bond.

Unlike Cornejo, her co-accused Lee and Raz’s posting of bail and release went smoothly. They were given temporary freedom on Tuesday afternoon from a regular jail in Camp Bagong Diwa in Taguig City.