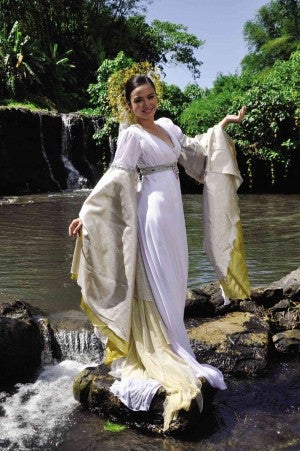 Patricia Fernandez, lead actress in the Jun Urbano epic “Ibong Adarna: The Pinoy Adventure,” said the toughest part about shooting the movie was climbing a steep mountain in a long gown.

Fernandez plays a deity who aids the prince in his quest for the Adarna, a magical bird with a healing voice. The film, set before the Spanish colonization, was partly shot in the area surrounding Lake Pandi in San Pablo, Laguna.

“I never imagined myself doing any such thing; I’m not athletic, by any means. We hiked all the way up. It was challenging in that gown. Good thing Rocco (Nacino, lead actor) was very patient with me,” Fernandez said in an interview after the recent “Ibong Adarna” special screening at the Mowelfund compound in Quezon City.

According to Urbano, there were also scenes filmed at the Banaue Rice Terraces and the beaches in Calatagan, Batangas. Other sets were located in Tanay, Rizal and Quezon Province.

Nacino plays Prinsipe Sigasig, who seeks to save his ailing father, Sultan Mabait (Joel Torre), by bringing him the Adarna. “Direk Jun was pleased with us,” Fernandez recounted. “He said Rocco and I had ‘chemistry.’ I would like to work with Rocco again. He guided me,” Fernandez told the Inquirer.

“Ibong Adarna” is Fernandez’s first film since she joined show business in 2008, the year she was crowned Binibining Pilipinas-International. She is now part of Solar News Channel’s headliner morning news program, “Solar Daybreak,” for which she does weather updates and feature stories in her own segment.

She found acting “exciting” because of the relaxed work environment, she said. “Direk Jun was very generous. He never shouted or lost his cool. He made sure that the atmosphere on the set was light and stress-free. I guess it helped that, aside from being a director, he is also an actor,” Fernandez explained.

“Ibong Adarna” was first adapted into film in 1939 with Victor Salumbides at the helm. Urbano’s late father, Manuel Conde, was technical supervisor in that production, which featured Fred Cortes and Mila del Sol. In 1955, Conde remade it in color. Another version was released in 1972 and directed by Pablo Santiago. It starred Dolphy and Rosanna Ortiz.

“Stories like this have been passed on to many generations, and Filipinos interpret them in ways that conform to their time. There was so much effort put into this movie. I especially liked the colorful costumes of the cast members,” Fernandez said.

In a previous Inquirer interview, Urbano said he was especially proud of the “authentic” costumes. He said most of the materials were bought in Mindanao. “We patterned them after the colorful costumes of the T’boli people in South Cotabato,” he said, crediting multiawarded production designer Joey Luna.

Fernandez is among the celebrities who will walk the ramp in a fashion show titled “Night of the Stars: A Celebration of Philippine Barong and Filipiniana Dresses” on Sept. 20 at the Philippine International Convention Center in Pasay City. The event is organized by the National Commission for Culture and the Arts and Simem International.

“I have always loved wearing the terno,” said Fernandez. “It flatters a woman’s shoulders and elongates the body. Whenever I wear it in fashion shows, I make it a point to ask the designer the story behind the outfit and the materials. The more personal it gets, the higher the value we associate with it.”

Fernandez said she was happy that more people are becoming aware of our national costumes through the efforts of different government agencies. “We are pushing for the creation of more products using indigenous materials, to turn them not just into costumes, but also into elegant laces, curtains and table mantles,” she said.