Escudero: Wedding to Evangelista is on Feb. 15 in Balesin 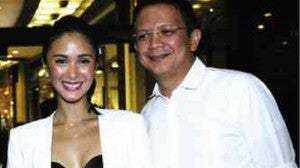 MANILA, Philippines—Sen. Francis Escudero confirmed on Wednesday he and fiancee Heart Evangelista have set plans to wed on February 15 in Balesin Island Club, as he decried attempts to blame them for the supposed bumping off of another couple’s wedding in the exclusive resort.

“I honestly don’t know why they are dragging us into this… We just decided, late yesterday afternoon, on the date of our wedding—it’s February 15,” Escudero said in a text message on Wednesday.

Escudero said he and Evangelista should not be dragged into the fray if another couple had a problem with the resort’s management.

“Whatever problem they may have with Balesin, and vice versa, is a matter that is solely between and among them,” he said.

TV host Cesca Litton reportedly issued a statement Tuesday night saying that her February 14 wedding in Balesin had been bumped off to make way for the nuptials of Escudero and Evangelista.

But Balesin Island owner Roberto Ongpin issued a statement, saying nobody had been “bumped off.”

In a statement posted on the Balesin website, Ongpin said he was the one who had invited Escudero and Evangelista to have their wedding in Balesin. He extended the invitation during a dinner with the couple after they returned from a trip to Paris in July. This was before the couple announced their formal engagement.

Ongpin said he was pleased when the couple informed him that they had decided on Balesin as their wedding venue.

When he received the confirmation from the couple, he said he checked with the resort’s reservation office and was told nobody had confirmed for a February 14 wedding as of that time, so he told the staff to block off the date.

He added that as long as the wedding parties had a few hundred guests, more than one wedding party could be accommodated in Balesin, even during the peak season.

Ongpin said he issued the statement from Europe. He said he only learned about the issue of a couple’s wedding in Balesin supposedly being bumped off from his daughter and nephew, who read about it on Facebook.