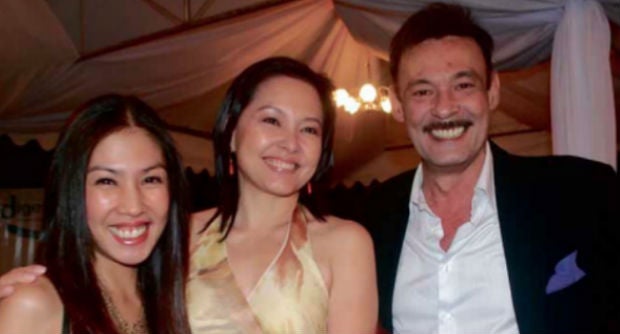 MANILA, Philippines–He never got to fulfill his dream to act in a play with his siblings.

Actor Mark Gil died at 8 a.m. Monday after a battle with liver cancer. He was 52.

Gil—Raphael John de Mesa Eigenmann—told the Inquirer in an interview early this year that one of his dreams was to top-bill a stage drama with his siblings and fellow award-winning actors Cherie Gil and Michael de Mesa.

Lillian Hellman’s “The Little Foxes,” which was supposed to be produced by sister Cherie, would have marked Gil’s stage debut.

“Acting onstage is exciting and scary,” he said.

Gil was part of the respected clan of actors headed by parents Eddie Mesa and Rosemarie Gil.

He married Maricar Jacinto-Eigenmann in 1995.

He was last seen in the action film “Ang Bagong Dugo” and in the TV series “The Legal Wife” (on ABS-CBN) and “My Husband’s Lover (GMA 7).

He was best known for portraying fraternity neophyte Sid Lucero in Mike de Leon’s “Batch ’81.” His son Tim later adopted Sid Lucero as his screen name as a tribute to his dad.

Recalled Pimentel: “When I was pregnant with Tim, Mark wasn’t doing well [in his career]. We had very few canned goods left at home. The freezer was empty. An old friend, a seaman, visited us. Mark asked me to cook everything in the cupboard to give his friend a warm welcome—even if we wouldn’t have anything to eat the following day. He had a generous heart.”

At the “Bagong Dugo” press conference a few months back, Gil said: “I did a lot of action films in the 1990s. In the past, I used to play the assistant of mob boss [the late] Subas Herrero who would often slap me… Now I play the crime lord and I get to slap my minions.”

His manager June Rufino said wake and interment details had not been finalized at press time.

Filmmaker Peque Gallaga, who directed the Eigenmanns in the 1980s TV series “Cebu,” described Gil as “a consummate artist who had the gift of infusing human attributes to different characters—very much like himself in real life. He was gentle, tender, violent and explosive; funny, self-deprecating and terrifying. He projected intelligence, street smarts and cluelessness. He was a loving and generous actor, my son, friend.”

Gil Portes, who directed Gil in the Vilma Santos-starrer “Miss X” in 1980, said: “Mark was a complex actor but a delight to work with. He consistently displayed excellence as an actor.”

Batangas Gov. Vilma Santos recalled: “He was a great actor and very flexible as we shot ‘Miss X’ in Amsterdam.”

Filmmaker Joel Lamangan, who directed Gil in numerous movies such as “Ngayon at Kailanman” in 1992, agreed: “He gave his best in every role. He was an intelligent interpreter of different characters. The film industry will never be the same again without Mark.”

Actress Sharon Cuneta, who costarred with Gil in “Pasan Ko ang Daigdig” and “Ngayon at Kailanman,” said: “He was very talented. I never had problems with him on the set.”

Indie filmmaker Adolfo Alix Jr. recounted that Gil was “very accommodating and accepted a small role in the 2006 Cinemalaya entry ‘Donsol’ because it was the launching film of his son Sid.”

“He was one of Philippine cinema’s best. He was always a committed coworker but never forgot to joke around on the set,” Alix said.

Said director Elwood Perez: “I forgot to get a fight instructor on the set of ‘Stepsisters,’ but Mark’s timing and prodigious talent saved the day.”

Another indie filmmaker, Benji Garcia, who directed Gil in his last critically lauded film “Philippino Story” last year, said: “He inhabited every role that was assigned to him with all his humanity. He was kind and giving. I will miss him.”

Actor Gardo Versoza called Gil “a true friend and a passionate coworker. As an actor, he was sensitive and intense.”

Another frequent costar Ronnie Lazaro said: “He was dedicated to his craft. I will miss his presence and energy.”

Production designer and filmmaker Cesar Hernando, who worked with Gil in “Batch ’81,” recalled: “He was in the same league as [the late] Vic Silayan and Jay Ilagan. Very professional.”

Singer Moy Ortiz of the vocal group The CompanY got to work with Gil in a TV production of “Camelot” in 1987. “He was Lancelot to Zsa Zsa Padilla’s Guinevere. He was effective because he ‘acted’ out his songs.”

Years later, Ortiz bumped into Gil in a hotel lobby. “I thought he wouldn’t remember me… but he did. Despite his stature, talent and good looks, he remained grounded and approachable,” said Ortiz.

Son Gabby Eigenmann posted on Instagram Monday: “Thank you for all that you have done for me and the family. Thank you for the legacy you have left behind. You will forever be in our hearts. Till we meet again.”

In one of his last interviews, Gil told the Inquirer: “To be a good actor, you have to be truthful. First and foremost, you have to be professional. Given the pros and cons of the business, it’s best to hone your craft and take it seriously. Don’t be blinded by fame… and aim for longevity.”