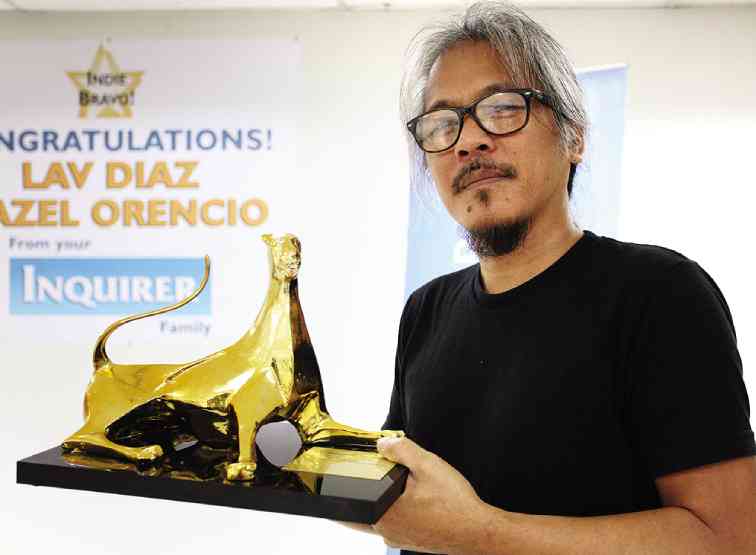 Fresh from winning the Golden Leopard at the 67th Locarno International Film Festival, Lav Diaz’s “Mula sa Kung Ano ang Noon” will have a “Handog sa Bansa” special screening on Sept. 21. The exact venue will be confirmed later by the Film Development Council of the Philippines (FDCP).

A regular pay screening is tentatively set from Sept. 13 to 23.

FDCP, coproducer of the Locarno festival winner, recently feted Diaz and his production team in a victory lunch at the government body’s office in Makati.

Asked for his thoughts on the award, the highest honor that the country has won so far in an A-list film festival, Diaz said: “The award is a consequence of the work. The work is more important. [However] it’s good for us Filipinos…it’s good for Philippine cinema as a whole, not just the industry. From the commercial scene to the aesthetic domain, we’re doing well. It helps. It pushes our cinema.”

Diaz pointed out: “My only responsibility is to make good films. I want to do only good films for our culture, that’s all. Cinema is a very young art, just a hundred years old. There’s still a lot we can do. The horizon is vast.”

As for Filipino filmgoers, he expressed the hope that they will watch “Mula sa Kung Ano” because “it talks about what happened in the last two years before martial law. It’s based on real events. The characters are based on real characters in our village (in Mindanao) when I was a kid. I pulled out everything from memory. It’s a foreboding…it’s a horror film actually. We were entering hell and we felt that then.”

Hazel Orencio, recipient of the Boccalino d’Oro Independent Critics Award for Best Actress in the same movie, said:  “It’s too good to be true. The other Boccalino awardees were Paul Vecchiali and then Pedro Costa. In acting, you don’t expect to be given an award. It’s just an affirmation that you’re doing something good.”

The members of Diaz’s team shared the hope that more Filipinos will get to see the movie. They all commended Diaz for not being afraid to push the art.

They believe moviegoers will eventually regard film not just as entertainment but also a way to tackle social issues and everyday problems.

The “Handog sa Bansa” special screening is open to the public on Sept. 21, the 42nd anniversary of the declaration of martial law in the Philippines.

The screening seeks to commemorate the film’s recent triumph in Locarno, the FDCP said, “and serve as an occasion to reflect on the martial-law era and its significance in our history.”