‘Original queen of all media’–UP 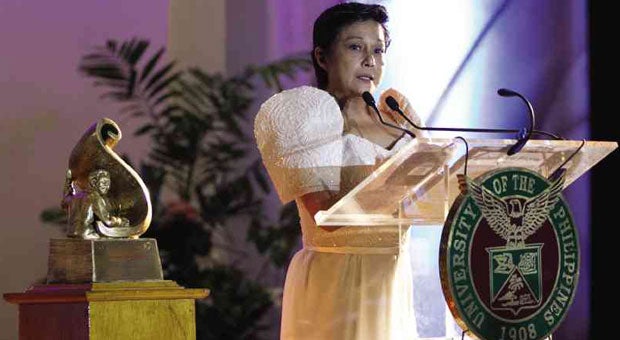 NORA Aunor’s “lecture” was a trip down memory lane, crossed with a master class in acting. photo by Alexis Corpuz

“The Original Queen of All Media,” was how Professor Emeritus Nicanor Tiongson of the College of Mass Communications (CMC) of the University of the Philippines in Diliman, described singer-actress Nora Aunor, recipient of this year’s Gawad Plaridel.

Roland B. Tolentino, dean of UP CMC, explained that Aunor is the “model for the next generation of media practitioners… testament that popularity is the key to elevate one’s art and craft.”

In his own speech, Michael Tan, UP Diliman chancellor, welcomed “fellow Noranians” to the awarding ceremony held at the Cine Adarna on Wednesday. He then introduced Aunor as a national artist.

Organizers had asked Aunor beforehand to deliver a “lecture”—a prospect that daunted the honoree. “I couldn’t sleep last night,” she said in Filipino. “I don’t know how to give a lecture. Let’s just call it sharing.”

She then “shared” a lengthy speech, recounting the ups and downs of her colorful five-decade career.

Among the highlights: She won a cash prize of P20 for the first singing contest she joined in a town fiesta. “You and the Night and the Music” was the only song she knew by heart at the time (from listening to a neighbor’s radio). “I won the first time, but when I joined another contest with the same song, I lost. I had to learn others.” 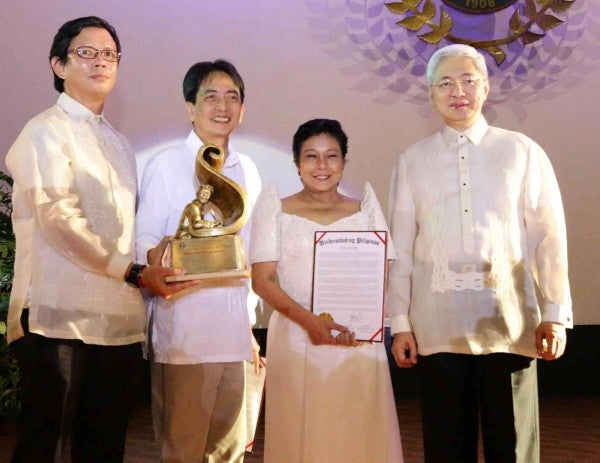 That, she did. “When I joined ‘Tawag ng Tanghalan.’ I got to sing ‘People,’ ‘Moonlight Becomes You…’”

The sharing was a freewheeling trip down memory lane, crossed with a master class in acting.

She talked about her first crush (fellow teen idol Tirso Cruz III, with whom she starred in hit movies) and her first husband (Christopher de Leon, who pushed her to improve as an actress). She admitted she was a fan of then child star Vilma Santos, who would be her rival.

Aunor recounted her forays into television and theater, and her successes and failures in the movies.

Some films, she confessed, she did only because she needed the money. “But I returned the down payment for one of them because the script was bad.”

She almost didn’t get to do Brillante Ma. Mendoza’s “Thy Womb,” she said, because she was under contract with TV5, which wasn’t too keen about the script. She risked getting sued and accepted the project.

The gambit paid off handsomely; she has so far been rewarded with at least 10 best actress trophies here and abroad for the indie film.