Daniel’s ma cooking up a storm by now 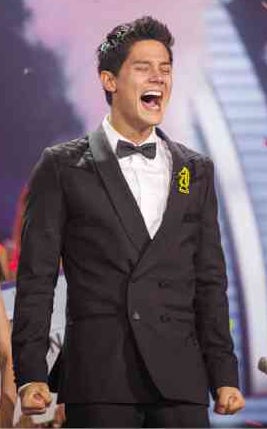 “PBB ALL In” winner Daniel Matsunaga

Actor-fashion model Daniel Matsunaga will be eating a lot of the Portuguese barbecue churrasco and the Brazilian bean dish feijoada now that he is out of the Big Brother House.

This, according to Daniel’s Brazilian mother Geralda, who spoke with the Inquirer shortly after her son was declared winner of the reality show “Pinoy Big Brother All In” on Sunday night.

Daniel’s father Paulo is of Japanese descent. “We will cook all the dishes that he loves. We will shower him with a lot of love and care,” Geralda said in Portuguese, with Daniel’s elder sister Vanessa as her interpreter. They agreed that Daniel had lost a lot of weight since he joined the contest in May.

“I think he is now 10 kilos lighter. I just want to feed him [well]. I felt how thin he had become when I hugged him,” said Vanessa. “We didn’t exactly make plans about what we’d do when he got out. Right now, I just want to hug him, be close to him and enjoy his presence again.”

Daniel was allowed very limited time to speak with show biz writers during the finale since he needed a debriefing before facing the public. He stayed inside the Big Brother House for 99 days. 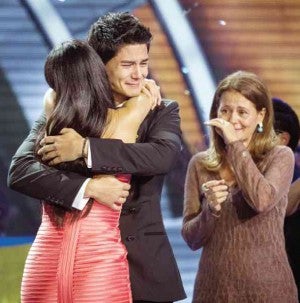 THE WINNER hugs his sister while his mom, in tears, watches.

The 25-year-old won P1 million in cash, three business franchises, an Asian tour for two, and a brand-new condominium unit.

Geralda said Daniel’s victory was not his but “the Lord’s.” She added, “It is a big thing and we don’t know how to [absorb] it yet. We just want to thank all of his Filipino fans for voting for him.”

She added that all of Daniel’s “efforts”—leaving home at an early age to find work, to be precise—has finally paid off. She was confident that “big things” would now come to Daniel “because he is loving and kind and is always positive.”

Dubbed this season’s “Hunk of the World ng Makati,” Daniel garnered the highest net votes at 11.69 percent—as announced during the “PBB All In: The Big Night” held at Resorts World Manila in Pasay City.

Daniel spoke to his supporters in Taglish during the finale: “Some people think na hindi ako Filipino, pero I am so much more proud to be a Filipino at heart than many others out there na hindi proud sa country… I’m thankful, first to God, who gave me this opportunity. One day sinabi Niya sa akin na I have a purpose dito sa Pilipinas, and I guess this purpose is today. Mahal na mahal ko kayo.” 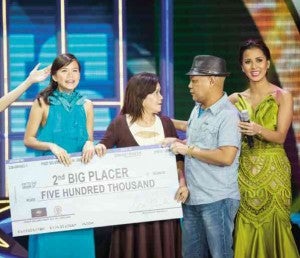 (Some people think that I am not Filipino, but I am so much more proud to be Filipino at heart than many others out there who are not proud of this country. … I’m thankful, first to God, who gave me this opportunity. One day he told me that I have a purpose in the Pilipinas, and I guess this purpose is today)

Vickie Rushton landed in the fourth spot with -0.78 percent net votes. She bagged a cash prize of P200,000. All Big Four housemates each received a home entertainment package.

Posts bashing him (for not having Filipino blood) were quick to come, but there have been posts of support, too. Twitter user @diana_limuco said she found it “cute” that Daniel filed for Filipino citizenship in 2012, but wondered, “Is he sure about giving up his Japanese and Brazilian dual citizenship?”

In an earlier interview with show biz writers, Daniel, who already has a working permit here, said his aim was to become a Filipino citizen. “I’ve been working on it; hopefully, the government [will soon decide I am qualified].”

Daniel was sure he would sometimes miss Brazil. “But I’ve found my new home here,” he said. “My life is here. My career is here. I want my whole family to live here.” 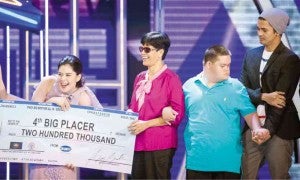 VICKIE Rushton, fourth placer, is “welcomed back” by her mom, brother and boyfriend Jason Abalos.

In a text message to the Inquirer, ABS-CBN Integrated Corporate Communications officer in charge Kane Choa said there was no “strict rule regarding PBB housemates’ citizenship.” He cited as examples the cases of “PBB Teen Clash” Big Winner James Reid, who is Australian, and second placer Ryan Bang, who is Korean. “What is important is that the housemate exhibits and emulates the characteristics worthy of a Pinoy Big Winner,” Choa said.

Vanessa also came to her brother’s defense. “You can’t choose where you’re born, but in your heart, you can choose where to belong. Daniel belongs to this country,” she insisted. “Our family is very happy that the Filipino people accepted him as their own. This country adopted us and gave us opportunities that were never given to us elsewhere. We all want to stay here.”