Nora Aunor on UP honor: Is this for real? 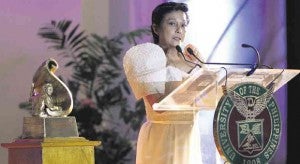 PLARIDEL AWARD Actress Nora Aunor accepts the Plaridel Award, conferred on her by the University of the Philippines at the UP Film Center in Diliman, Quezon City, on Wednesday. ALEXIS CORPUZ

MANILA, Philippines–Before Malacañang could formally install the new crop of National Artist Awardees, the University of the Philippines beat the Palace to the punch, conferring on singer-actress Nora Aunor the Gawad Plaridel Award on Wednesday in ceremonies at the state university’s Diliman campus.

Aunor, who initially made it to the list of nominees for National Artists of 2014 that the Cultural Center of the Philippines and the National Commission for Culture and the Arts submitted to Malacañang, was removed from the honor roll by President Aquino.

Aunor has clearly moved on from the controversy that arose from the presidential snub, however.

“Para sa akin, hindi pa siguro napapanahon. Ibibigay naman sa atin ’yon pag karapatdapat. (The way I see it, I suppose the time is not yet right. It will be given when it is fully deserved),” she said in an interview before the Gawad Plaridel awarding ceremony.

Being declared the “People’s National Artist” by various sectors was more significant for her, she said.

Apart from the UP’s Gawad Plaridel, the Gabriela Women’s Party, Peace for Life, the Quezon City Public School Teachers Association and the Alliance of Concerned Teachers earlier honored Aunor for her contributions to Philippine art and culture.

Gawad Plaridel, “the highest honor that UP hands out to a media practitioner,” is meaningful to her because it came from teachers, Aunor said.

“Even if I never went to college, it was as if I graduated because those giving me this award are from UP … I’m proud because this award came from teachers and academics,” she said in Filipino.

Aunor, who was asked to deliver a “lecture” during the awarding ceremony held at Cine Adarna in UP Diliman, said she was overcome. She said she was “nervous, embarrassed and happy. I don’t know what to feel anymore.”

She recounted that people from all walks of life would often approach her to congratulate her for being the “People’s National Artist.”

“It makes me wonder: Is all this for real? People approach me. I never, even in my dreams, thought this would happen, that I would be so honored… and at my age!” she said.

Aunor, who turned 61 last May 21, recalled that preparations for the Plaridel ceremony took more than a month.

An exhibit of Aunor memorabilia was set up in the university. The Paoay city government lent the Elsa sculpture (depicting the character she played in Ishmael Bernal’s “Himala”) to the state university.

“She is honored for her achievements in various media: television, recording, movies, theater,” he said.

The UP College of Mass Communication (UP CMC), which established the annual event, cited Aunor’s unique artistry and versatility as a singer and actress.

Referred to as the country’s Superstar, Aunor has won best actress trophies not only from local award-giving bodies, but also from international film festivals. For Brillante Ma. Mendoza’s 2012 film “Thy Womb,” Aunor won at the Asia Pacific Screen Awards in Australia and the Asian Film Awards in Hong Kong.

The UP CMC also cited Aunor’s achievements as the producer behind such “movies of notable quality” as Gerardo de Leon’s “Banaue,” Lupita Aquino-Kashiwahara’s “Alkitrang Dugo” and Bernal’s “Tisoy.”

Recalling how she came to be a producer, Aunor said she seemed to be playing housemaids all the time.

“I couldn’t seem to get out of those roles. That’s why I produced films. Even if I didn’t have money, I persisted in producing movies. When I am down, when my career is down, when I have lots of problems, one thing gives me strength: I make it a point to produce a beautiful film that people will love and talk about,” she said.

The UP CMC lauded Aunor for “using her tremendous popularity as an opportunity to help the masses … appreciate films and plays that dramatized and analyzed the abject conditions of … the poor and the powerless.”

In a video presentation, Dr. Nicanor Tiongson called Aunor “the original Queen of All Media.”

Roland Tolentino, dean of the UP CMC, told the Inquirer: “Gawad Plaridel is not connected to the National Artist award. Gawad Plaridel honors Nora Aunor for her professionalism and artistry in television and film.”

Young actress Chynna Ortaleza, Aunor’s costar in her latest films Joel Lamangan’s “Hustisya” and Perci Intalan’s “Dementia,” was asked by Plaridel organizers to write a message, as a representative of the new generation of actors.

Ortaleza said: “Nora Aunor performed three miracles. She shattered the traditional image of a movie star. She is not mestiza, but she is very talented. She is real in a world of make-believe. Her eyes are mirrors to her soul. In her eyes, you see her entire life. That’s where her truth comes from. She teaches without teaching. She may not be a national artist, but it’s only a matter of time. It’s written in the stars and among the stars there is only one Superstar.”

Aunor is the first to shy away from the role of mentor to the new breed of actors. “I’m too shy to give acting tips,” she said.

Pressed to say what advice she might want to give the younger stars, she said: “For the youth, they have to take to heart the job that they have chosen. Because sometimes when they become popular stars, they change. They should excel not only in their craft, but they should have the right attitude, too.)”