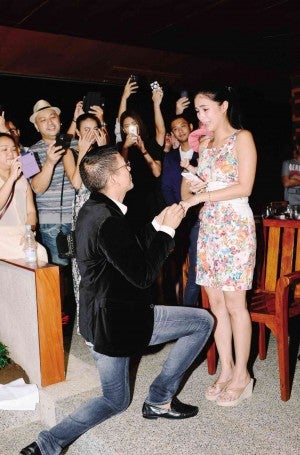 A long fireworks show signaled Heart’s acceptance of that proposal, and of the sparkly heart-shaped diamond ring, an Escudero family heirloom, that she has since worn.

The proposal, witnessed by the senator’s family and the couple’s close friends, took place at the Escudero estate in Buhatan, Sorsogon, where they had gone to for the long weekend.

“On Friday, some of Heart’s friends started arriving in Sorsogon without her knowledge,” said a source close to the couple. Alessandra de Rossi, Lovi Poe and Rocco Nacino arrived on Saturday.

Heart, 29, thought it was just the usual garden dinner, the source recalled. When music started to play at 8 p.m., a friend led Heart to the dining area where the guests were waiting. Chiz walked in with his twins Quino and Chesi, mom Elvie and sister Dette.

“Heart was already in tears by that time,” said the source. “Chiz read to her a text message from her dad (Rey Ongpauco), congratulating her for the engagement. Chiz then instructed his son to take out the ring, knelt on one knee, and asked Heart to marry him.”

In April 2013, the senator told the Inquirer that he and ex-wife Christine Flores were having their church marriage annulled after three years of separation. The delay in the process was among the issues raised by Heart’s parents when they publicly expressed disapproval of the 44-year-old Chiz.

The marriage was annulled in civil court in 2012. An online report said the petition for church annulment was granted last month.