No rousing welcome for Lav Diaz, other victors of biggest ever film award for PH | Inquirer Entertainment
Close
menu
search

No rousing welcome for Lav Diaz, other victors of biggest ever film award for PH

There was no hero’s welcome, no marching band, no ticker-tape parade for the ragtag crew that brought the biggest honor the country has received so far in an A-list film festival.

When they arrived in the country on Monday, Filipino filmmaker Lav Diaz and actress Hazel Orencio took a taxi home. Actor Perry Dizon rode the bus.

Four days after the country’s ground-breaking victory at the 67th Locarno International Film Festival, Diaz and his crew were still on cloud nine when they visited the Inquirer office in Makati on Wednesday.

Not even commuting from the airport and the Manila traffic dampened their spirits.

Filmmaker Mac Alejandre, who was in the cast of Diaz’s 2001 film “Batang West Side,” said: “When a beauty queen wins third place in a pageant abroad, there’s a ticker-tape parade. How I wish there was a hero’s welcome for Lav and his crew. It’s a manifestation of how we regard artists and cultural workers.”

Alejandre quickly pointed out, however, that Diaz didn’t seem to mind the lack of fanfare. “Lav is a realist. If you look at his films, there are no unnecessary trimmings. He wouldn’t have wanted a big fuss over their homecoming,” he said.

On their Inquirer visit on Wednesday, the entire crew seemed unfazed and rode high on the warm reception and rave reviews, not to mention the five awards that Diaz’s latest work—the five-and-a-half-hour epic “Mula sa Kung Ano ang Noon (From What is Before)”—had received at the Locarno fest in Switzerland, which is regarded as one of the most prestigious cinema events in the world, along with Cannes, Venice and Berlin.

They gleefully shared stories of their European adventure with the Inquirer multiplatform team.

It was Lav at first sight for Locarno.

Orencio recalled that a jury member had told her that the jurors “unanimously” declared “Mula sa Kung Ano ang Noon,” a political allegory on martial-law atrocities, the best picture in the competition lineup the first time they saw it.

“When the film was announced best picture at the (open-air venue) Piazza Grande [during the awards ceremony on Saturday evening], the entire place roared with the crowd’s cheers and applause. It moved us to tears. We cried onstage while Lav delivered his speech.”

The speech was a blur, recounted Diaz. “I was nervous. I was shaking and couldn’t remember what I was saying. I asked the audience permission if I could speak in Filipino.”

He said he found it disconcerting that only months ago, he was mired in mud while shooting the film in a remote village in Cagayan Valley. 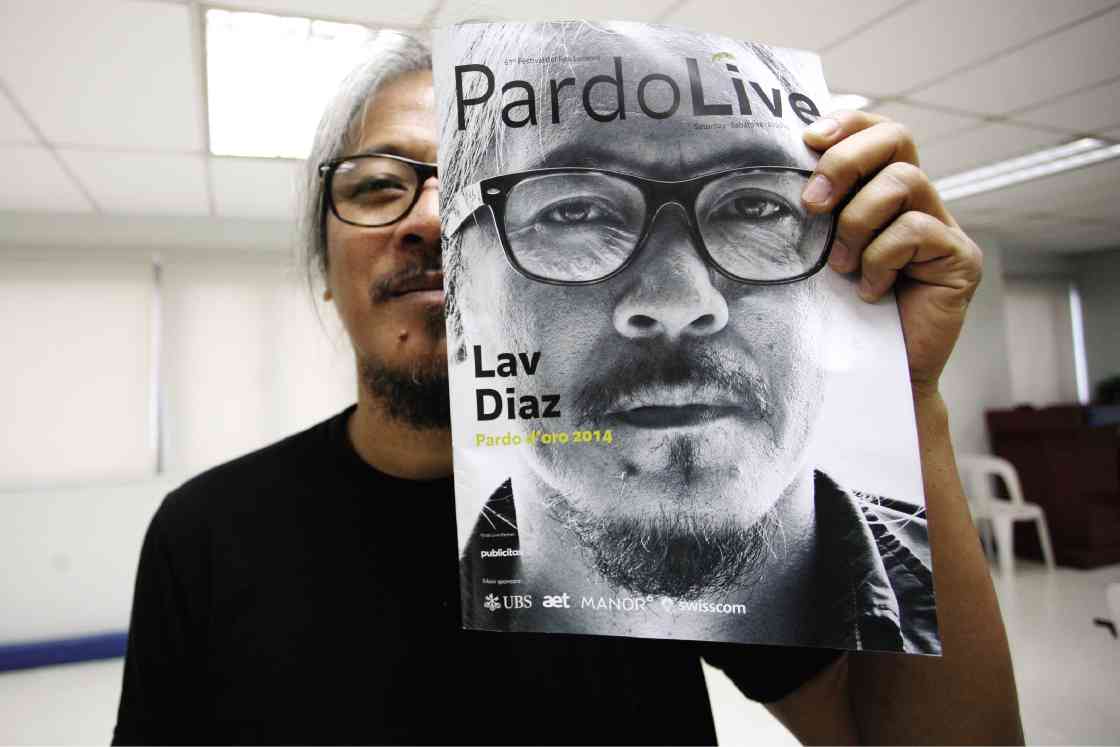 LABOR OF LAV Filmmaker Lav Diaz holds the official Locarno festival magazine with himself on the cover. KIMBERLY DELA CRUZ

He never imagined that his film would take him to a “manicured resort frequented by the bourgeoisie … to receive an award” in an A-list festival, he said.

He ended the speech with an appeal to end war in various parts of the world. “I offer this award to the elusive ideal of world peace,” he said.

It was Diaz’s—and the country’s—first time to compete in the main section of Locarno. (In 2005, Brillante Ma. Mendoza’s “Masahista” won the Golden Leopard in the video section of Locarno.) Last year, Diaz’s film “Norte, Hangganan ng Kasaysayan” competed in the Un Certain Regard section of the Cannes International Film Festival.

Earlier, during a press conference held in Locarno on Saturday afternoon, Orencio said the festival officers treated the Filipino contingent “like royalty.”

“The organizers made us feel special,” she said.

Diaz said he was surprised when additional awards were presented to the film during the press conference on Saturday.

In spite of these achievements, Diaz’s homecoming was unheralded by the public at large.

Alejandre described Diaz as a simple, humble but hopeful man. “His simplicity is precisely the reason why he’s so brilliant,” he said.

More than a grand welcome, Diaz and company were more concerned about packing the haul of awards and certificates they won in Locarno.

“We couldn’t figure out how to make the trophies fit in our luggage,” Orencio said. “The Golden Leopard trophy is big and heavy.”

“Ang dami naming karga! (We had to carry a lot!) These honors are for the country,” Diaz said.

Fest organizers advised against placing the three trophies (Best Film, Don Quixote and Boccalino) in their carry-on bags. (Fipresci and the Junior Jury handed out certificates.)

“Immigration officials might stop us at the Swiss airport if we hand-carried the trophies. So we packed them in our luggage. We wrapped the awards in my gown to protect them,” Orencio said.

“The Golden Leopard is really golden. But it’s just 0.001 of the missing Marcos gold,” Diaz said in jest. “Filipino filmmakers have to win the gold prize every year for the next 100 years to retrieve the Marcos loot in Swiss banks.”

“The Boccalino is an award given by Italian and Swiss critics,” Orencio said. “It’s the same group that gave Nora Aunor the Bisato d’Oro award for best actress at the Venice fest for Brillante Ma. Medoza’s ‘Thy Womb’ in 2012.”

The critics feted Orencio during a ceremony held at the Rivellino Art Gallery in Locarno on Friday.

“I didn’t expect the award. I was only in slippers and T-shirt at the event,” Orencio said.

“The gallery is located in a house where Leonardo Da Vinci once lived,” Diaz said.

According to reports, President Benigno Aquino III sent his congratulations, through Communications Secretary Herminio Coloma: “Once again, we have shown to the world Filipinos are undeniably talented.”

Now, for the hard part.

Will Filipinos get to watch the five-and-a-half-hour film in local cinemas—like “Norte” which had sold-out screenings in selected Ayala cinemas?

Briccio Santos, chair of the Film Development Council of the Philippines, which coproduced “Mula sa Kung Ano ang Noon,” said: “SM Cinemas plan to show the film for an entire week in Manila and other cities.”

Read Next
Superstarstuck girl
EDITORS' PICK
Every Filipino home can now be a smart home with realme TechLife
PLDT Home Prepaid WiFi customers now under the care of Smart
Nestlé Philippines’ ‘NESCAFÉ Plan’ bags Grand Anvil at PRSP 56th Anvil Awards
Wesley So officially a US citizen
‘Pilgrim of peace’ Pope Francis heads to war-scarred Iraq
WHO: Arrival of vaccines in PH ‘a powerful step’ towards economic recovery, normalcy
MOST READ
Kris Aquino dispels rumors on son Josh getting married, thanks Ogie Diaz for defending him
Wesley So officially a US citizen
Ginebra trades Slaughter to NorthPort for Standhardinger
LTO’s P500-M deal for screws draws scrutiny
Don't miss out on the latest news and information.