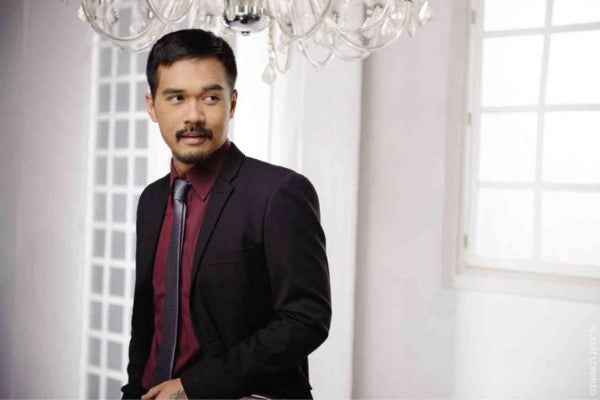 One will have to listen closely to catch the remarkable revelation that this man, tattooed and bearded rock star Marc Abaya, wears his heart on his sleeve for his mother, the late filmmaker Marilou Diaz-Abaya.

Throughout this hourlong conversation, Marc started several replies with, “Another lesson my mom taught me.”

“My mom never watched my gigs. Music was my own thing,” the vocalist of the rock band Kjwan told the Inquirer in a recent multiplatform interview at the Bandera office.

His mom was not so keen about his foray into television and movie acting, either. The late actor and family friend Johnny Delgado had to intervene. “Tito Johnny convinced my mom,” Marc recalled. “He became my acting mentor, as did (Johnny’s wife) Tita Laurice Guillen.”

When he finds himself tired, jaded or on the verge of losing his artistic integrity, Marc said, he thinks of his Tito Johnny. For instance, when indie director Marie Jamora asked him to wear a ridiculous wig in the 2012 Cinemalaya entry “Ang Nawawala.”

Marc recounted, “I was like, ‘What are you doing?’ She explained that she wanted to show my range as an actor. I couldn’t refuse; Tito Johnny would have slapped me silly.”

Vanity
Number one commandment in acting, he quickly learned, was, “Thou shalt not be concerned about thy looks.”

Marc asked rhetorically, “If you are immersed in your role, why worry about your best angle? I am vain [but] I try not to be. My job requires me to remain in the moment and not fuss about makeup because the cameraman has been on the set since 4 a.m.”

Such no-nonsense professionalism he puts to good use on the set of the GMA 7 primetime series “Ang Dalawang Mrs. Real.”

He straddles the mainstream and indie worlds effortlessly—yet another gift from his mom.

For the just-concluded Cinemalaya indie festival, he was in the cast of Janice and Denise O’Hara’s “Sundalong Kanin,” an entry in the New Breed section. (He plays the young “Heneral Luna” in Jerrold Tarog’s coming epic.)

The O’Hara sisters are nieces of the late great filmmaker Mario O’Hara, another contemporary of his mom’s. Thus, though the World War II film was shot in Taal, Batangas, he didn’t mind the long commute.

“It was a privilege working with the O’Hara family,” Marc enthused. “Kinareer ko. (I took it seriously.) I didn’t shave for a while; I was playing a guerrilla.”

Once, taking a snapshot with the cast and crew, he realized how fortunate he was to work with the O’Haras. “Everyone was there—the entire family. May we make all our parents proud.”

He gets a kick out of working with Marilou’s peers in GMA 7 shows, too.

Chanda Romero, who played his insane mother in the Kapuso afternoon series, “Faithfully,” was a hoot, he found out. “Tita Chanda would jest, ‘Marc, I used to wash your putotoy when you were a kid!’”

With coactors like Chanda, letting go of inhibitions was a piece of cake. He finds himself watching his seasoned “Mrs. Real” coactors with admiration, sometimes while they’re doing the same scene.

“I have to catch myself,” Marc admits. “Celeste Legaspi, Robert Arevalo, Connie Reyes, Jaime Fabregas, Tommy Abuel and Susan Africa … they are the best. Dingdong (Dantes) studied film under my mom. Best part is hearing their stories about her. Every time I step on the set, my connection with mom (who passed away two years ago) is renewed.”

His favorites among his mother’s movies? Marc enumerated: “‘Baby Tsina’ has a ‘Pulp Fiction’ vibe. What she achieved in ‘Jose Rizal’ is mind-blowing. ‘Muro Ami’ is intensely personal. ‘Bagong Buwan’ is profound. She studied the Koran for that film.”

His mom and dad (cinematographer Manolo Abaya) considered “Karnal” their all-time favorite, Marc said. “They would talk about ‘Karnal’ for hours.”

The list would not be complete without “Ikaw ang Pag-Ibig,” Marilou’s last movie. “It was her swan song,” Marc said. “Her way of saying goodbye.”