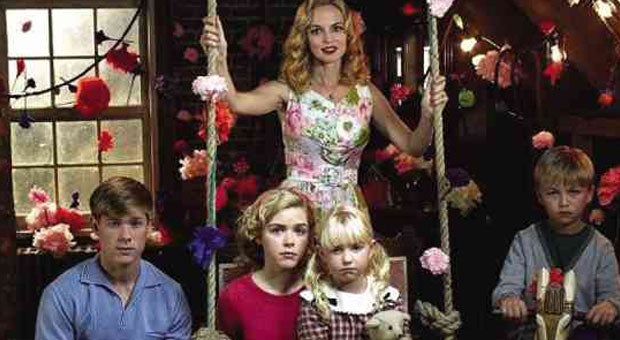 Sordid secrets fester behind the charm of a model American family in the disturbing Lifetime TV movie, “Flowers in the Attic,” a grim family drama/crime story based on the 1979 book by VC Andrews.

First adapted into a movie in 1987, “Flowers in the Attic” is remade into a sleek, aptly perplexing and exploratory TV special that tackles psychological terrors, taboo territory, and muddled family dynamics.

Set in the 1950s, the tale initially presents a picture-perfect family, Norman Rockwell-esque in their shared joys and dreams.

But after the untimely death of Chris Sr. (Chad Willett), loving husband and father of four, the seemingly clueless wife Corrinne (Heather Graham) drops a bomb on her teen children Chris and Cathy (Mason Dye and Kiernan Shipka)—she is actually estranged from extremely wealthy parents, whom they must now live with.

Corrine, the teens and young twins Carrie and Cory (Ava Telek and Maxwell Kovach) leave Pennsylvania and trek to an old mansion in Virginia, where they are met by Corrine’s smug mother Olivia (Ellen Burstyn).

The children’s presence is kept a secret from Corrine’s father, and they are strictly instructed by Olivia to stay in a room that connects to the attic. The youngsters later find out that their mother had been in a scandalous relationship, which caused the estrangement.

Their forced confinement turns to days, then weeks, while they keep getting excuses and fanatical religious judgments over wrongdoings they haven’t committed.

“Flowers in the Attic,” thanks to its alluring imagery and cleanly retro trappings, disarms by presenting a seemingly safe, comfortable time and place— which belie some sick, twisted secrets. They all bob to the surface, slowly but surely.

Burstyn is deliciously wicked as the grandmother from hell, tormenting her spawn and grandkids with unusual fervor. She spews religious condemnation one moment, and warns of the dangers of male sexuality the next; she’s a bogeyman that, ironically, inhabits the brightly lit, poshly decorated parts of the house.

The twisted nature of her daughter Corrine is given spunk and flavor by Graham, who, in this more mature role, shows some range and credible dichotomy. Those big, expressive eyes are put to good use here, cold windows to a broken soul sometimes, and just insane and glaring on other occasions.

The teen grandchildren are pivotal parts that are given justice by Dye and Shipka, who imbue the confused prisoners with odd chemistry and disconcerting energy. The two promising actors have the longest screen time, and their performances, partly, make the film gradually compelling despite its oft-challenging pace. 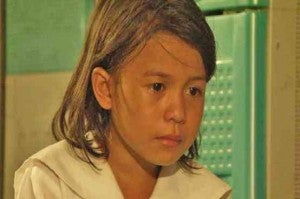 LYCA Gairanod debuts as an actor in tomorrow’s MMK.

The first grand champion of “The Voice: Kids,” Lyca Gairanod, will share her story in   “Maalaala Mo Kaya (MMK)” tomorrow.

In preparation for the episode where she will portray herself, Lyca underwent an acting workshop under the supervision of MMK director Nuel Naval and veteran actress Malou de Guzman.

MMK airs every Saturday, 8 p.m., after “Wansapanataym” on ABS-CBN.