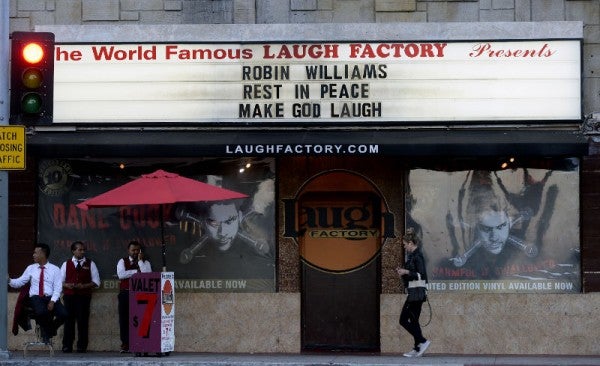 A person walks past the marquee of the Laugh Factory with a message in memory of actor/comedian Robin Williams in the Hollywood district of Los Angeles, Monday. AP

MANILA, Philippines–Celebrities took to Twitter and Instagram to express their grief over the death of Hollywood actor Robin Williams who died Monday (US time) in his California home due to “apparent suicide.”

Hollywood personalities like Taylor Swift, Anna Kendrick, Neil Patrick Harris, and Miley Cyrus tweeted that they were saddened by the death of Williams.

Actress Jessica Chastain said that Williams changed her life because of a scholarship.

Local celebrities also used social media to express their grief over the death of Williams. Anne Curtis posted a photo of Williams playing as Peter Pan on her Instagram account with the caption “”all you have to do is think one happy thought, and you’ll fly like me” -Peter Pan RIP Robin Williams. May you continue to fly like angels in heaven or Peter Pan & Tinkerbell in Neverland. A great shock and loss in the film industry where he will be remembered for the laughter and tears he gave us with each role he portrayed. Many of my first childhood favorites starred this amazing actor. ”

#RIPRobinWilliams became the number one trending topic on Twitter in the Philippines, Tuesday morning. Movies that starred Williams like Mrs. Doubtfire, Dead Poets Society and What Dreams May Come also became trending topics.