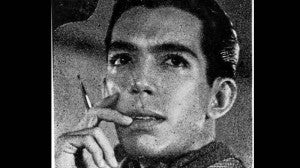 Ramon Estella, son of composer Jose A. Estella (“Ang Maya”) was 27 years old when he directed his first film, “Bayan at Pagibig,” in 1938.  The movie was based on a story he had written for Excelsior Pictures, a saga involving the Philippine Army. He chose two unknowns, Estrella del Rio and Bert Le Roy, to vivify its love story. According to a review, the film was “the first Filipino movie tackling army life.”

Estella moved on to Philippine Films, where he was its youngest director. The project assigned to him, “Buenavista,” resulted in his being proclaimed Director of the Year by Philippine Cinema and Radio in 1941. For her performance in the film, Rosa del Rosario, was chosen Actress of the Year.

The bombing of Pearl Harbor in 1941 interrupted Estella’s peacetime activities and revived his fascination with movies about love of country. His last movie before Manila was declared an open city to the invading Japanese was 1941’s “Huling Habilin.”

Unable to write about the Philippine Army, which became non-existent after Gen. Douglas MacArthur left the country, Estella turned to the guerilla movement. After WWII, he directed “Voice of Freedom” in 1946, where he depicted guerilla life during the Japanese occupation.

In a love story set during the war, “Magkaibang Lahi,” he focused on a Filipina married to an American soldier who was brought to the United States after the war.

Each time the filmmaker made a movie about the war, he got into trouble: When he made “Ako Raw Ay Huk” in 1948, all the censors appointed by President Quirino, with the lone exception of Teodoro Valencia, refused to issue a permit –unless the title was changed! Premiere Productions eventually agreed to change it to “Labi ng Bataan.”

Estella’s final piece de resistance for his war-themed oeuvre was reserved for Filipinas Pictures, which made its debut with “Sundalong Talahib,” based on the story of Juan Feleo, who had earned a reputation as the “moving spirit” of the Hukbalahap movement. Its star-studded cast included Mona Lisa, Ricardo Brillantes and Fe Claudio.

Estella spent the last years of his life in Florida with his Japanese wife. His last visit to the Philippines was in 1981 during the Manila International Film Festival, where he had a grand reunion with his former colleagues.