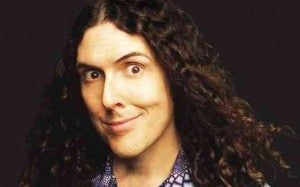 YANKOVIC. Thrilling race to the finish.

Recently, “Weird Al” Yankovic and Jason Mraz found themselves slugging it out for the top spot on the Billboard 200—a thrilling race to the finish that had Yankovic’s “Mandatory Fun,” the 14th studio effort of the loopy but good-natured 54-year-old musical parodist, beating Mraz’s bright and breezy acoustic set, “Yes!,” by a nose.

The “duel” was made more interesting by the fact that both recording artists then had yet to bow at the top of the US album chart. Yankovic told the Associated Press that, to be able to spoof Iggy Azalea’s “Fancy” (via “Handy”), he asked the hotshot rapper’s permission to record a cover of her No. 1 hit tune as she was walking off the stage—during her concert in Denver! —Talk about persistence!

In “Tacky,” whose video features Jack Black, Margaret Cho, Kristen Schaal, Eric Stonestreet and Aisha Tyler, he sings about people who are as socially inept as they are fashion-backward.

Inspired by Robin Thicke’s “Blurred Lines,” “Word Crimes” cheekily enumerates frequent errors in grammar involving syntax, conjugation, split infinitives, dangling participles, the proper usage of “its” vs it’s” and “who” vs “whom,” and more: “Keep in mind that ‘be,’ ‘see,’ ‘are’ and ‘you’ are words, not letters/ Never write words using numbers—unless you’re 7 or your name is Prince!”

For his part, Mraz was gracious in “defeat,” demonstrating what a cool guy he was by posting this message last July 24 on his Facebook fan page: “Saying that you don’t like ‘Weird Al’ is like saying you don’t like the Muppets. He is a ‘Mandatory’ mainstay! Congratulations, ‘Weird Al’—you make us feel good!”