Mommy Dionisia: Yes, I have a boyfriend named Michael 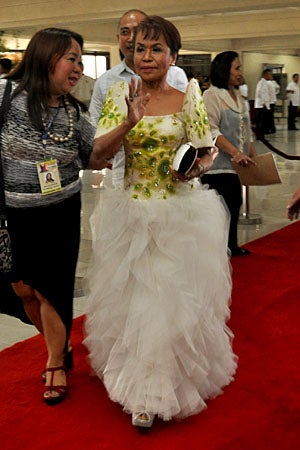 MANILA, Philippines—Mother of boxing champion and Sarangani Representative Manny Pacquiao, Dionisia, has confirmed reports that she has a boyfriend.

The 65-year-old Dionisia, known as Mommy D, said in a news program “Bandila” over ABS-CBN Wednesday evening that her boyfriend is named Michael, a 40-year-old man who was also her escort on her birthday last May.

She said she is not taking her relationship seriously just yet and they are not living together.

Manny said in a television interview last week that his mother has a boyfriend and they have been living together.

“It is only natural to have a boyfriend,” Dionisia said in Filipino.

“You should get to know your suitor and don’t rush. Many of them say ‘I love you’ but these are just words,” she said.

She also revealed that her boyfriend has plans to work abroad.

‘Mommy Dionisia has a boyfriend?’