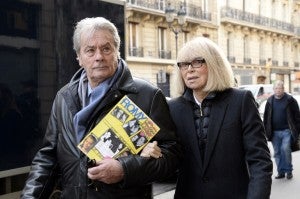 French actor Alain Delon and French actress Mireille Darc walk on the street after attending a ceremony in tribute to late French film director Georges Lautner on Dec. 5, 2013 in Paris. Delon has undergone surgery after being admitted to hospital in Paris with severe back pain, French media reported Wednesday, Aug. 6, 2014. AFP PHOTO/BERTRAND GUAY

PARIS–The French actor Alain Delon has undergone surgery after being admitted to hospital in Paris with severe back pain, French media reported Wednesday.

The 78-year-old star, who came to embody late 1960s French cinematic cool in films such as “The Samurai,” recently appeared on stage in the French capital with his daughter Anouchka in the play “An Ordinary Day.”

Neither the actor’s secretary nor his family was available for comment.

Read Next
Japanese actors arrive in Manila for premiere of anime-inspired film
EDITORS' PICK
Acer starts the year off strong with the Aspire Vero National Geographic Edition
Gear up and get ready to play with Yamaha Mio Gear
Over 3 Million worth of prizes to be won at Smart Padala’s SENDali Manalo Promo!
Metro Manila posts lowest temperature yet this ‘amihan’ season at 19°C
DOH: 28,471 new COVID-19 cases in PH; active cases now 284,458
On Day 2 of implementation, gov’t says workers now exempt from ‘no vax, no ride’ policy
MOST READ
Cold-case investigation names surprise suspect in Anne Frank’s betrayal
Emma Stone calls Andrew Garfield a ‘jerk’ after he ‘lied’ about his ‘Spider-Man: No Way Home’ appearance
Derek Ramsay on being married to Ellen Adarna: ‘Gumaan ‘yung mundo ko’
Czech anti-vax singer dies after deliberate infection
Don't miss out on the latest news and information.