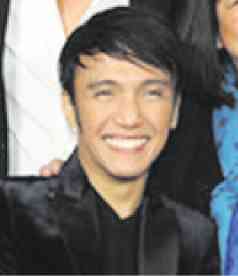 PINEDA. Has taken ownership of his power within Journey.

Last week, we attended the screening of Ramona Diaz’s acclaimed documentary, “Don’t Stop Believin’: Everyman’s Journey,” the rock ‘n’ roll saga of Arnel Pineda, at Rockwell. Diaz got interested to film the iconic band when she read about how an American consul granted Pineda a US visa after asking him to sing “Wheel in the Sky” in front of everyone.

The filmmaker shares, “Journey took a leap of faith with him. The band was looking for a lead singer and found him on YouTube. Rock ‘n’ roll is big business—the group goes out every summer and plays 90 shows.”

In the documentary, Pineda recounts his humble beginnings and shares how he copes with his newfound fame, “When I was 13, I’d sleep in the park with other homeless kids. Sometimes, we’d go to a wake and sing there, eat biscuits and drink coffee just to survive.”

Diaz recalls, “He told me that if it happened to him in his early 20s, he would have gone crazy. But, now that he’s in his 40s, he already knows that some things don’t last forever. It’s going to end soon, and he knows he needs to save up for it. The day he can’t walk away from it is the day he’ll get himself in trouble!”

Diaz decided to do the documentary after she interviewed Pineda in 2008. She enthuses, “The first time I met Arnel, I knew I had to do it! Some people glow in front of the camera—like Arnel, who was very open. He’s very articulate about what’s happening to his inner life, which is rare.”

“Don’t Stop Believin’,” which will be screened at Cinemalaya on Aug. 3, chronicles the evolution of a star. Diaz adds, “The band loves him. He has relaxed and taken ownership of his power within the band. He is now a leader!”