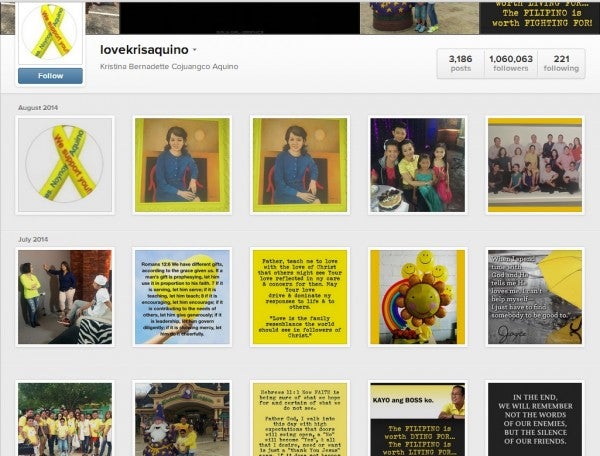 After the first family went to a mass on Friday to remember their late matriarch Corazon “Cory” Cojuangco Aquino on her fifth death anniversary, the host-actress took a jab at the critics of the President, particularly those in the media.

Calls mount to impeach President Aquino over the Disbursement Acceleration Program, which was declared as unconstitutional by the Supreme Court.

And for each of her follower who praises President Aquino on Instagram, he or she gets a bonus: Kris’ reply to their comment.

But if the follower bashes the President, Kris said, she blocks them on the photo-sharing site.

“I have a lot of social networking followers and everyone who says good things about him, they get a bonus because I reply to them. Siyempre iyong mga nega binoblock ko na lang. Pero konting-konti lang sila (Of course those who post negative comments, I block them. But they are only few),” she said.

“I shared that with my sisters and I guess I can tell that to Noy now that the great majority of our people still really believe in him. They know what the good job he is doing. Ang problema lang iyong mga bilib tumatahimik (But the problem is, his supporters just remain silent),” she added.

Aquino says critics against beneficiaries of his administration