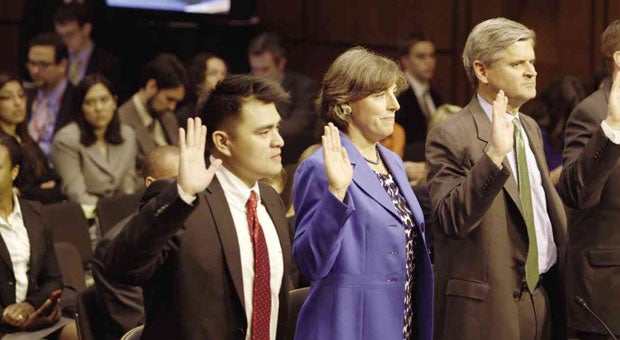 VARGAS (left) with Jessica Vaughan (director of Policy Studies for the Center for Immigration Studies) and Steve Case (cofounder of AOL) before the Senate Judiciary Committee in Capitol Hill last year during a hearing on comprehensive immigration reform. “I was accompanied by my lola Leonila Salinas, my uncle Conrad Salinas and my aunt Aida Abaga-Rivera.”

It’s a “homecoming,” just the same. Although he cannot attend the Manila premiere of his documentary, “Documented,” at the Cultural Center of the Philippines tonight, Filipino-American journalist Jose Antonio Vargas feels it is as though he has returned.

Vargas, 33, an “undocumented immigrant,” cannot travel outside of the United States because he lacks the papers to be allowed back in.

He is “humbled,” he told the Inquirer in an e-mail interview, by Cinemalaya’s decision to open the 10th edition of the annual indie festival with his work.

“This illustrates the power of movies,” said Vargas, who is based in New York. “I may not be physically present, but ‘Documented’ will be there. Movies travel in all languages [and] bridge cultures.”

The film and the self-confessed film buff behind it both come full circle with tonight’s screening.

Vargas elaborated, “I was born in the Philippines; the country is in my blood. As a kid, I watched lots of Filipino movies. I recently rewatched (the Sharon Cuneta film) ‘Bituing Walang Ningning,’ which I first saw as a boy. And I’m now discovering Lino Brocka as a true cinematic pioneer.”

Vargas, who worked as a journalist for The Huffington Post, the San Francisco Chronicle and the Philadelphia Daily News, was part of the Washington Post team that won the Pulitzer Prize in 2008 for its breaking news coverage of the 2007 shooting rampage at Virginia Tech in Blacksburg. 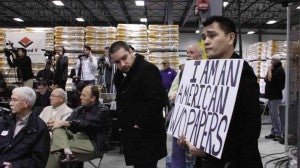 Out in the open

The issue of immigration reform affects numerous Filipinos, he said. “Of the estimated 11.5 million undocumented immigrants in the US, at least 1.3 million are from Asia. Many are from the Philippines.”

Filipinos in the US and in the Philippines have “barely scratched the surface when it comes to this issue,” Vargas pointed out.

He noted that undocumented Filipinos are called TNT (short for tago nang tago or always hiding). With this film, he comes out in the open as a TNT. “I am done hiding. This film, to me, is an act of civil disobedience, and a way of making sense of my identity as a Filipino-American.”

On a personal level, he is glad that his mom Emelie and other relatives will get to watch the docu tonight.

“My mom will attend the premiere with my sister Czarina and brother Carl,” Vargas said. “I have not seen Mama and Czarina since August of 1993. I’ve seen Carl only onscreen, while editing the movie. My cousins will be there as well—including Vernon Ceballos, whom I haven’t seen in 22 years. Vernon is now a doctor and I am very proud of him.”

He can’t wait to share his story with his family. “The film documents one story… and there are almost 12 million stories like mine. I hope my relatives, especially Mama, will see their sacrifice fairly, and humanely, documented in the film.”

In a 2011 New York Times Magazine column, Vargas revealed that he entered the United States in 1993 with false documents.

He was 12 at the time, and he  lived with his grandparents, both naturalized citizens. At age 16, when he tried to apply for a driver’s license, he learned that his US green card was fake.

Vargas is nervous about how Filipinos would react to the film, “in the same way that I’m anxious about going back to the Philippines once I get my papers,” he told the Inquirer.

Although he has traveled extensively in the United States for numerous speaking engagements, he cannot travel abroad because he has no US passport.

Last July 15, Vargas hogged the headlines when he was “detained” by the US Border Patrol in south Texas. The experience made him realize that he’s the “most privileged undocumented immigrant in the US.”

He explained, “When most immigrants are detained, [they are] arrested and deported. It’s not reported as breaking news. That’s why I’m working this hard. With great privilege comes great responsibility.”

With his organization, Define American, Vargas is at the forefront of the crusade for immigration reform. “Our lives are at the mercy of a dysfunctional Congress. Our hopes are tied to President Barack Obama, who is expected to issue an executive order in a few weeks to provide [amnesty] to undocumented immigrants.”

The executive order is shrouded in uncertainty. “We don’t know just how inclusive and extensive President Obama’s executive order will be,” Vargas said, asserting,  “The fight is bigger than getting papers and passing a piece of legislation.” 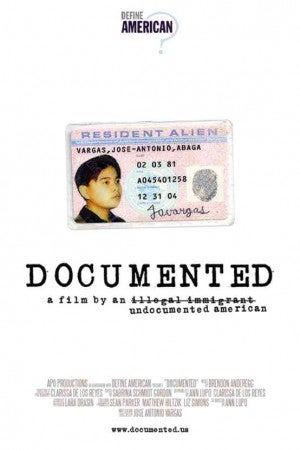 As far as he is concerned, the struggle is “about changing the culture in which we talk about immigration and citizenship in a changing America.”

He considers “Documented” a “labor of love.” his production company is named Apo Anak Productions, a tribute to his grandparents and mother.

“After she interviewed my mom in the Philippines, Clarissa called and told me: ‘We have to do justice to this story.’ I was so blessed to find Clarissa. I am grateful for her eye and her heart,” Vargas said.

Screenwriter Vincent Nebrida was also instrumental in bringing “Documented” to the Philippines. (CNN aired the docu last June.) “Vincent saw an early cut of the film and became its champion,” Vargas said.

He is elated to be part of the booming Filipino indie scene. “It’s such an exciting time to be a Filipino filmmaker, both in the Philippines and in the US,” he said. “I look forward to the narrative films and docus of Kanakan, Brillante and Ramona Diaz.”

Vargas is currently working on a new pet project, “based on an idea I’ve been mulling since 2003, as a reporter for the San Francisco Chronicle.”