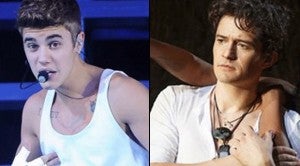 The report said the skirmish happened in front of celebrities who include Paris Hilton and rapper Diddy (Sean Combs). A video footage was also posted—a scuffle between two men which TMZ claimed as Bloom and Bieber.

Two eyewitnesses told TMZ that before the video began, Bieber “ducked the punch” thrown by Bloom. Bieber reportedly fled the restaurant with the crowd applauding.

Bieber’s ex- Selena Gomez, 22, has been reportedly hanging out with Bloom since her split from Bieber. Meanwhile, Bloom’s ex-wife, Victoria’s Secret model Miranda Kerr, 31, was linked to Bieber in 2012. The two were reportedly seen hanging out in a hotel then.

Bloom filed for a divorce in October last year.

After the incident Bieber took to social media to get back at Bloom, TMZ also said.

He posted in photo-sharing site Instagram a photo of Kerr in a bikini but later took it down. The photo did not go with a caption but there was a crown emoji.