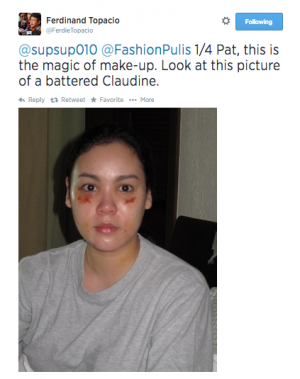 MANILA, Philippines–The camp of actor Raymart Santiago is being “too defensive,” the lawyer of Claudine Barretto said.

Atty. Ferdinand Topacio issued the statement after Santiago’s camp reacted on photos of Barretto with wounds and scars on her face.

Santiago’s camp claimed that he did not inflict those wounds on Barretto saying those were cause by a surgical operation she went through.

Topacio, however, said they never imputed to Santiago the infliction of Barretto’s injuries.”We mentioned no names. We did not accuse him of any crime,” he said.”So why the violent reaction? To use a colloquialism, defensive much?” he added.He said Santiago’s camp was “responding to an issue that was not even raised.”
FEATURED STORIES
ENTERTAINMENT
A look back at Susan Roces’ beginnings in Bacolod
ENTERTAINMENT
Susan Roces honored by Vilma Santos, Maricel Soriano, ‘Ang Probinsyano’ cast
ENTERTAINMENT
Why Ruffa Gutierrez’s parenting style is different from her mom Annabelle’s

Topacio added that Santiago’s camp “never runs out of excuses.”

“When Claudine first posted pictures on the net showing her with bruises, the other camp claimed they were makeup. Then they claimed they were self-inflicted. Now they’re surgical scars. It seems they will never run out of excuses,” he said.

In a recent photo shoot, Barretto who claimed she was a battered wife, showed wounds on her thighs, supposedly from cigarette burns.

Days after, her lawyer posted photos of Barretto with wounds on her face on his Twitter account.

The photos he posted showed how makeup concealed the supposed bruises on Barretto’s face.

“We posted those pictures in response to insinuations that the scars on the legs of our client were of recent vintage, since older pictures of her were compared to her recent ones, which older pictures showed her without any scars on her legs,” he said.

“We wished to emphasize the magic of makeup skillfully applied, which can hide even the most horrific of imperfections. Claudine, being a celebrity, would certainly be loathed to parade her scars in public before, and would endeavor to hide them with the use of cosmetics. It’s that simple,” he added.

Santiago, however, also released photos claiming Barretto’s wounds were due to a “post-surgical operation.”

“The pictures of a bandaged Claudine purportedly after a surgical procedure, prove nothing. There is no showing that they were even taken on or about the same time as the pictures we posted. Perhaps Mr. Santiago should have consulted his lawyer before he posted them as to their lack of worth as evidence,” he said.

According to him, the fact remains that Santiago has been indicted for two counts of physical abuse against his estranged wife.

The lawyer then gave an advice to Santiago’s camp.

“The Santiago camp should expend their energies in discharging Raymart’s obligation to financially support his children, instead of engaging in a debate where there is none, and where his name is not even mentioned,” he said.