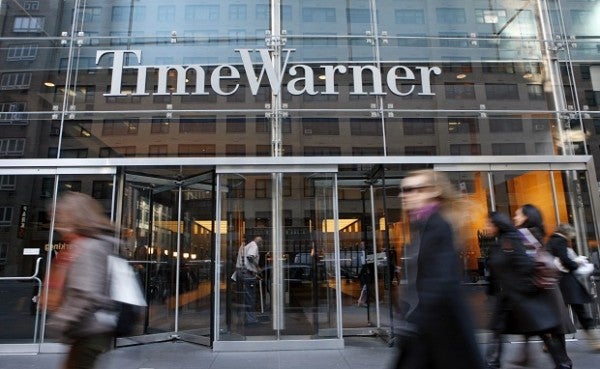 In this Nov. 7, 2007 file photo, people walk by the Time Warner Center in New York. Time Warner Inc. on Wednesday, July 16, 2014 said it has rejected a takeover bid from Twenty-First Century Fox and says it has no interest in further discussions with Rupert Murdoch’s media entertainment giant. AP

LOS ANGELES — Even though Rupert Murdoch’s $76 billion bid for rival media giant Time Warner Inc. has been rejected, that doesn’t mean how you watch TV shows and movies will stop changing any time soon.

The more must-have channels like HBO and Fox News Channel are assembled under one company, the stronger that company’s bargaining position in demanding licensing fees from the TV distributors, no matter how big they get.

Much of the value is in the television channels because of the ever-increasing fees they are able to command from cable and satellite TV providers. Disputes over such fees have led to temporary blackouts of popular channels from various systems.

The Comcast-Time Warner Cable and AT&T-DirecTV deals are both undergoing regulatory review. In disclosing the rejected bid Wednesday, Time Warner and Fox indicated that their talks were over, but analysts don’t expect Murdoch to give up. The offer was worth about $86.30 a share based on Tuesday’s closing price.

If talks resume and a takeover succeeds, analysts see some possible consumer benefits.

TV everywhere could get a push

A combination could accelerate the industry’s “TV Everywhere” push, in which traditional media companies make their channels available over the Internet as part of a TV subscription. It’s the pay TV industry’s answer to the rise of streaming services such as Netflix, YouTube and Amazon.

The hang-up in making those channels available online has partly been licensing deals with content producers. A unified company with an even larger suite of channels from TBS to FX could make such deals standard industrywide. Apps modeled after Time Warner’s successful HBO Go could also be applied to more networks.

“A player with more scale would be able to work on that and make digital content offering more user-friendly to the consumer,” Nomura analyst Anthony DiClemente said.

With a North American box office market share of around 30 percent, a combined Warner Bros.-20th Century Fox movie studio could push movie theater companies to shorten the time between when a movie hits theaters and when it’s available for sale or rental through digital outlets like iTunes.

A shortened window helps studios spend less money on marketing because they wouldn’t have to advertise each time a movie becomes available on a different platform. Theater companies have pushed back, as earlier digital release times could cut into ticket sales.

“They would have a lot of ability to experiment with new release patterns for movies,” FBR Capital Markets analyst Barton Crockett said.

ESPN could get a challenger

While there’s no guarantee that the cost of sports rights would come down, a merger would reduce the number of bidders for such rights and allow a combined company to spread acquired content over more channels. For example, after Comcast bought NBCUniversal, it rebranded Comcast’s Versus channel as NBC Sports Network and used it to carry figure skating and hockey during the Winter Olympics in Sochi.

Fox could bolster its sports channel, Fox Sports One, by combining efforts with Time Warner’s TNT to recapture the rights to broadcast NBA basketball games when they expire in 2016. TNT currently shares those rights with The Walt Disney Co.’s ESPN and ABC.

“A combined portfolio of sports could better challenge ESPN,” DiClemente wrote in a research note.

But there are possible downsides

To blunt the rise of streaming services like Netflix and Amazon Instant Video, a combined company would have more power to withhold content or demand steeper licensing fees. That, in turn, could force streaming services to raise subscription prices.

And further consolidation puts more media voices under the control of one entity. That’s why Fox, which operates the lucrative Fox News Channel, is willing to sell Time Warner’s CNN, according to one person familiar with the matter. That person spoke on condition of anonymity because that deal point wasn’t officially made public.

It’s unclear how regulators would view so many pay TV channels being owned by the same company.

And it’s not over yet

DiClemente and Janney analyst Tony Wible both believe that with interest rates low and with Fox having a healthy balance sheet, Fox could raise its bid above $100 per share by borrowing more money.

It also could set off interest by other bidders for Time Warner, which in turn could set off other mergers among content companies that don’t want to be left out.

“It’s a chain reaction,” Wible said. “There will be more consolidation on the content side.”

Crockett agreed. “I think what this is, is ‘Game on.'”